In yesterday's entry, I mentioned that you can use sunchokes as replacements for potatoes, including in hash browns. Here is some evidence! 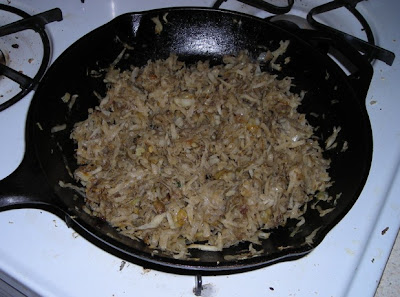 Sunchoke Hash Browns. This probably about 1.5 pounds of sunchokes, grated and cooked, ready to serve. They cook down quite a bit, but take a while. I used quite a bit of Earth Balance at the bottom of the pan, seasoned them with salt and pepper, and (I think) I put in a little water at one point to prevent them from drying out too much as they cooked. They took 15-20 minutes on medium-high heat, and I had to stir fairly often. All the cooking made them lose their characteristic crispness (which is good if you're making hash browns!), but the sunkchokes retained their fresh taste. I also included a finely chopped onion, which provided a really good flavor. I don't think you'd be able to fool anyone into thinking they're potatoes, but they satisfy hash-brown cravings and they're delicious in their own right.
Posted by Sarah P at 3:26 PM

Perhaps you can open your own Waffle House! Scattered covered and smothered.

great idea! I love sunchokes so much. I noticed that they are back at the farmer's market too. Yum!