vegan girl's guide to life signing, plus some food 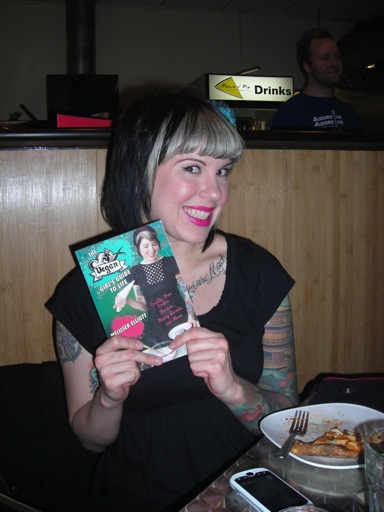 Last night, Melisser came to Peace o' Pie and signed copies of her new book, The Vegan Girl's Guide to Life. Of course I snagged a copy. Not only does it have a bunch of awesome recipes (including the jackfruit "carnitas" tacos, which are so delicious), but it's also a great resource guide for all things vegan, from the ethical hows and whys of veganism to substitutions in cooking/living to vegan knitting. There are also dozens of interviews with female vegans in a wide range of successful business or writing endeavors. It's a good read and a great resource, especially for new or aspiring vegans. (Ooo, I should get another copy to give to my newly-vegan sister for Christmas.) It really drives home how accessible and easy veganism can be. Melisser will be signing books in Brooklyn on the 20th, and Montclair, NJ on the 21st before heading over to Europe. You should go see her and get a copy!

Also at the signing: Jaymoh, who's keeping Melisser company on her travels, and other PPKers there, including Desdemona and her partner; DarthCupcake; Lixa" Fupupack' and B.Vicious. There were others, but I didn't catch their names. Almost all of us ate too much pizza.

So I didn't cook yesterday. But I have some food to share with you that I made a while ago and never made it into the blog: 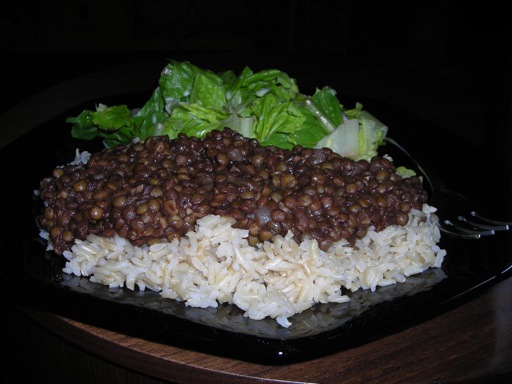 Tamarind Lentils from Veganomicon. Since Veganomicon is such a large book, and we have so many cookbooks, I haven't made many of the recipes more than once, but I've made this recipe about a dozen times. (Here's the recipe, care of Google books.) 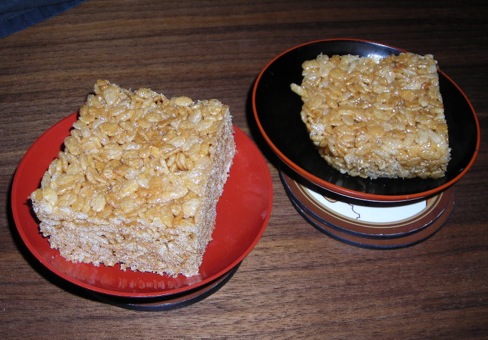 Vegan Crispy Rice Squares from Vegan Cookies Invade Your Cookie Jar. These were really tasty, and are the closest thing I've had so far to my mom's rice krispie treats from my childhood. (Vegan Newbie posts the recipe here.) 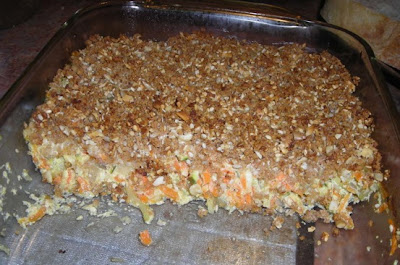 Finally, less picturesque but just as tasty, the Zucchini Carrot Crumb Casserole from one of the Dreena Burton cookbooks. I think Eat, Drink and Be Vegan, but now I'm not sure. We ate a lot of this per serving; it's pretty low fat and has lots of veggies, so we didn't feel bad. Actually, I almost never feel bad for eating large servings.

Except last night after eating an entire Peace o' Pie calzone. I was so full I felt like I was waddling everywhere afterwards.
Posted by Sarah P at 10:36 AM

It was pretty great, but there was no one there to freestyle about tots.

Thank you for posting about the Tamarind Lentils -- I made them last night. I needed to get out of my rut and see other recipes (now that recipe is known as being on page "chickpea cutlets - 10").