I wanted a bat house almost as soon as we bought our (human) house. I love bats. I used to love seeing them swing low over the lake to catch bugs when I lived in upstate NY. And they need houses! Many species of bats are experiencing dwindling populations as their habitats become disturbed or eliminated because of human land development. A little brown bat (the kind that live in bat houses) are great for bug control: they can eat more than 1000 bugs a night! They eat mosquitoes, wasps, moths, gnats, beetles, and midges, all insects I'd love to be rid of. Waltham has an especially large mosquito population, which makes hanging out on our porch after dusk way less enjoyable than it could be. Annnnd since bat houses are set up to be ideal living situations for bats, bats are less likely to move into a human house or barn if there is a bat house nearby. (Fewer than 0.5% of bats contract rabies, by the way, so we weren't worried about that.) If you want to find more about bats, bat conservation, or cute pictures of bats, I recommend checking out Bat Conservation International's website. They also list many certified vendors of bat houses, including the vendor we chose: Habitat for Bats!
You can make your own bat house (Bat Conservation International has specific guidelines and directions), but I chose to buy ours because we would have had to buy all of the materials anyway, and if you don't get the specifications right, you could actually injure the bats you're trying to house. Since I have few to no building skills, so I opted for the labor- and pain-free route.

The ideal location for a bat house is a tall (10-15 feet) pole or side of a building that gets a lot of sun. (Bats like warmth! That's why, if you live in a colder area, the bat house has to be a dark color.) You should be near a wooded area, but not too close, and you want to be within 1/4 miles of a body of water. We get a lot of sun and are fairly close to woods, but we're actually 3/4 miles away from the Charles River. I initially wanted to put the bat house on the side of our house, but didn't want to wash bat droppings off the siding on a regular basis, so we decided on a tree in our back yard. Trees are normally not ideal locations for bat houses because they tend to be shady AND bat predators (like owls) can perch on branches nearby, but this particular tree doesn't have any overhanging branches and is far enough away from other branches that we decided it would do. I wanted to drill right into the tree to mount the house, but Kevin was concerned about the health of the tree. so he spent some time online looking up other ways and devised a bungee-cord mount with the help of some online forums. 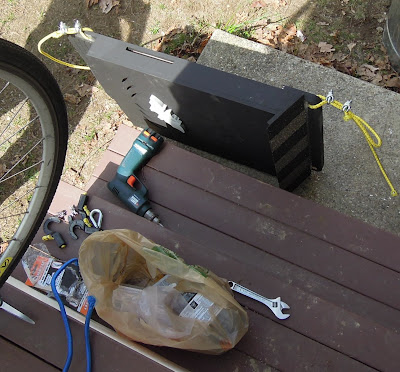 We borrowed an extension ladder from our neighbor (thanks, Michael!). Kevin held the ladder steady (not an easy job-the soil was still really soft in the back yard from all my earth-moving) while I put up the house. There was a lot of nut- and bolt-dropping from the ladder because I am clumsy. But when we were done: 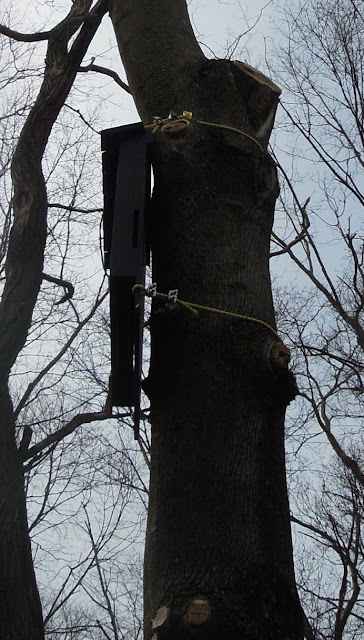 We had a mounted bat house! 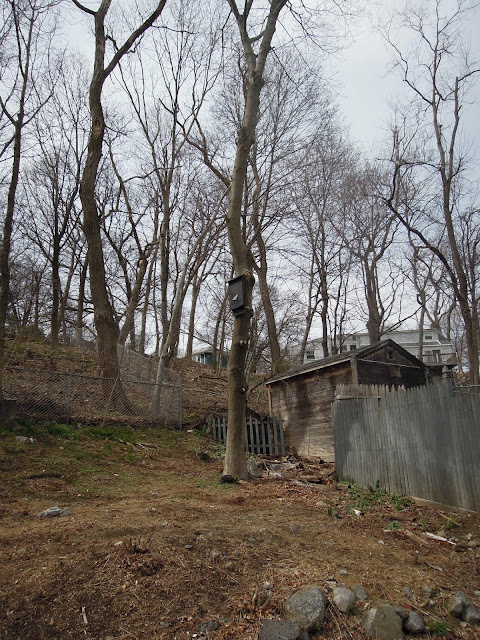 Little brown bats migrate to our area in late May/early June, so starting in June, I went back to the bat house every now and then to peek up inside-but never saw any bats. FOr a while I didn't seen any bats in it or flying around in the evenings, so I've been afraid we didn't have any bats. But 2 weeks ago, when I went to water my garden (which is near the bat house), I noticed there were BAT DROPPINGS at the base of the tree! And last week I saw a bat circling our driveway. SO WE HAVE BATS! (Or at least one bat.) Hooray! Hopefully now that they know it's there, more and more bats will migrate to the house each year. And someday I will sit out on my porch at dusk and not get eaten alive by mosquitoes!

I'm trying to get back into the swing of blogging, no less because VEGAN MOFO is in September this year! Since I'll be posting about food every day of that month, I'm writing about the house this month. I meant to be updating all summer.. but it turns out that the first year of being a first-time homeowner is really time consuming! July's post was and the next couple posts will be about some of the projects that have been taking up so much of my time (which would otherwise have been spent blogging, I'm sure).

First, here is the home my husband and I bought a little over a year ago: 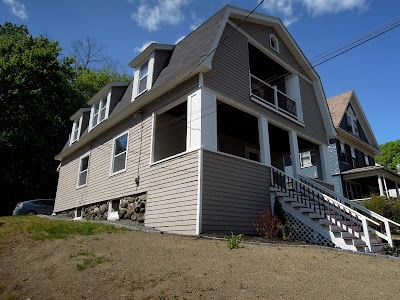 It was a partially flipped house built in 1910. I say "partially" because it seems like the flippers did the minimum amount of work they could do while still getting away with calling the home "flipped." But that was okay with us--we were both okay with the "fix-me-up" nature of some of our house.

I'll show you some inside shots in a later entry, but the real projects that have been sucking up my time are outdoors. Did you notice my front yard in the picture above? And how by "yard" I mean "dirt?" Here's another view: 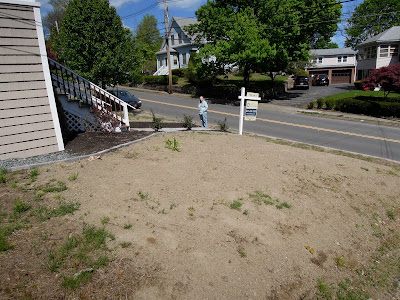 When we moved in, the only green in the front of our house was a few patches of crabgrass. (Which, true to crabgrass's nature, soon became "a jungle of crabgrass.") I put down grass seed and am still slowly trying to choke out weeds.

The slope of the front of our lawn is a difficult angle to mow, so I decided to turn the worst of it--the edges-- into flowerbeds. First I had to get rid of what was already there. I bought some black plastic sheeting. (Specifically I bought "landscape fabric," but any black plastic sheeting will do.) Because it is black plastic, it not only blocks the weeds underneath from getting any light, but it absorbs light, making the ground underneath it super hot, killing the weeds and (hopefully) their seeds. I laid it down along the edges of the lawn. It comes with flimsy plastic stakes, but I knew they wouldn't do the job for the many months I intended to leave them there, so I also just weighed down the plastic every few feet with pavers. 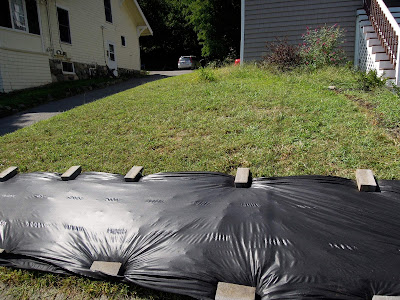 The green on the lawn in this picture is all crabgrass.

I did this in October of last year and warned our neighbors that it would look ugly for many more months, but it was in an attempt to make it look pretty in the future. 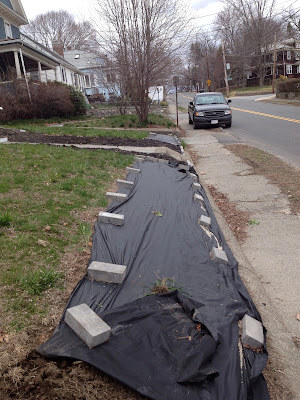 This past April, I rolled back the plastic, which had done a good job killing the weeds! I used a digging fork to turn the soil, mixing in some compost as I went. In retrospect, I should really have used some stronger tools (like my hoe axe!) and done a better job of really mixing up the soil, but I didn't know that at the time. 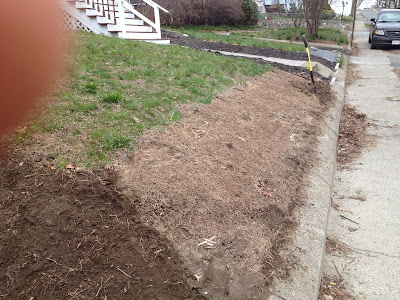 The picture above shows freshly-turned dirt on the bottom left side, and the paler row of not-yet-turned soil. Please ignore my thumb in the corner (oops). The picture below shows the fully turned bed: 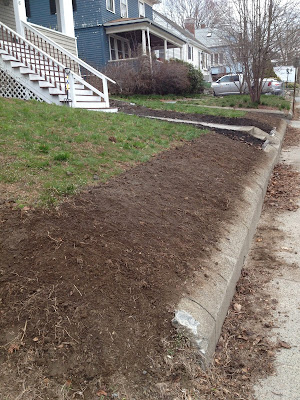 One bold robin, one of the first robins of the season, LOVED ME for turning all the soil, and followed me around the yard like an excited dog. All I had to do was turn my back, and when I'd turn around, there he'd be. He was sort of my yard work mascot this spring, as every time I did a new project, he'd be watching me and eating any worm I might unearth. 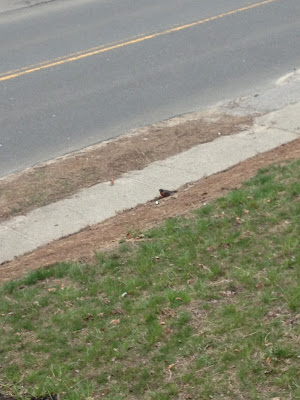 I then planted flower seeds. many of which died. Our front lawn gets full sun all day, every day, and we had an incredibly dry spring. I had picked all drought-resistant varieties, but despite daily watering, I couldn't keep the flower beds moist enough for little seeds to thrive--poor things! I replanted a few weeks ago, and some of the flowers are finally coming in, but it's a slow process. I've learned my lesson for next year: I'll have to start my plants indoors. 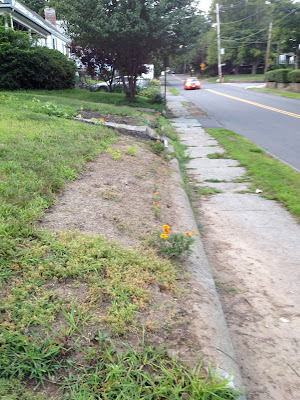 This is still a work in progress. It's not as pretty as it will be next year, but it's a start. I'll keep you posted!
Posted by Sarah P at 10:12 PM 3 comments: