A while back, a friend linked to one of those buzzfeed posts--you know the ones, "the top 20 things you have to eat in [city name]" or "30 signs you're [insert age]." But the one my friend linked to was about food. And I often click the food ones. I don't even remember what the list was, but at the side, another recommended article was "16 Delicious Uzbek Dishes You Need to Try Immediately." I love delicious food, and knew NOTHING about Uzbek cuisine, so I clicked--and discovered a whole list of very non-vegan things. (There is actually one vegan thing: a tomato salad, which, since I'm allergic, was sad.)

For some reason, rather than deciding Uzbek cuisine was not my thing, all this started me on a quest to try to make some vegan Uzbek food at home. 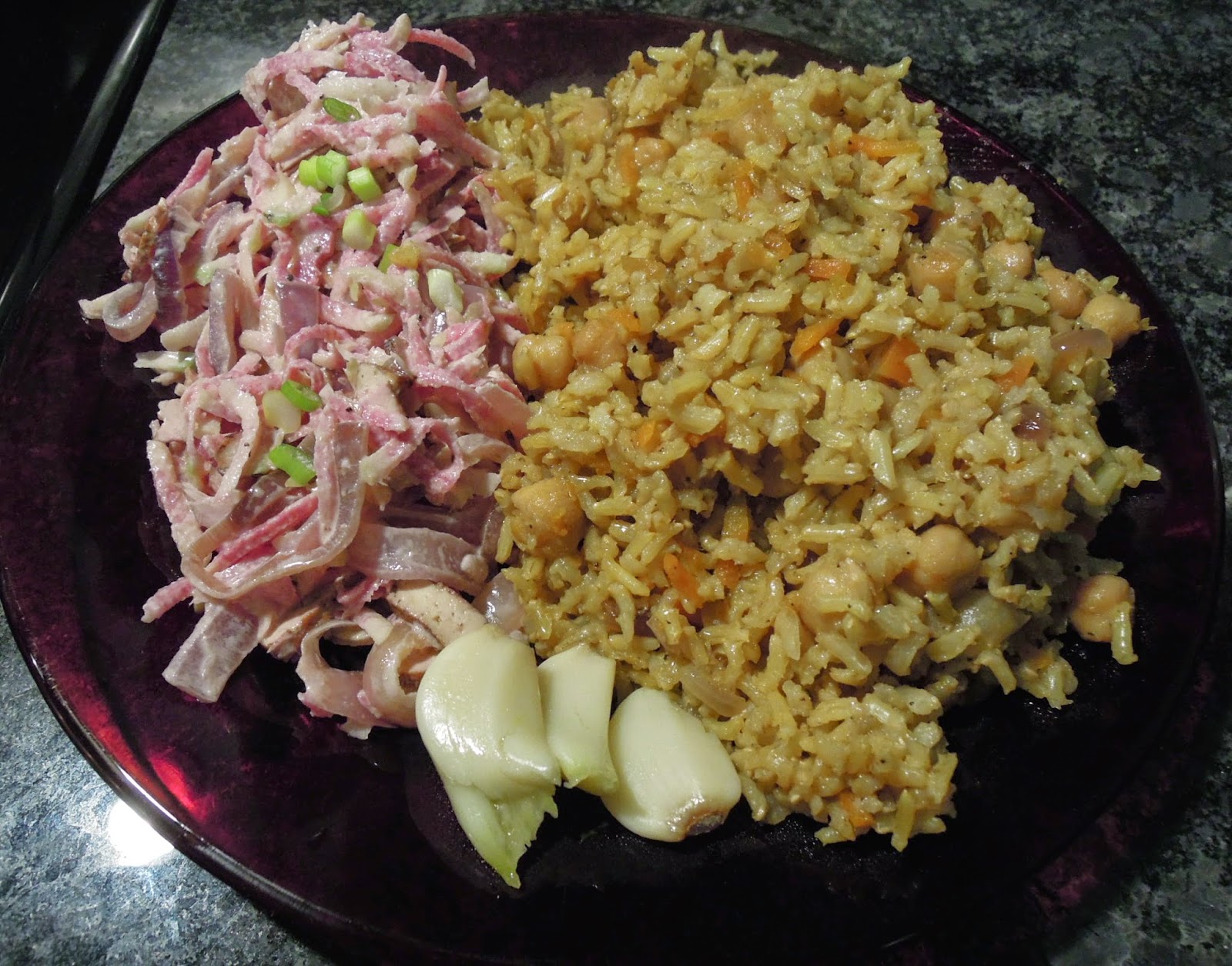 The most obvious dish to start with: Plov, which is essentially a rice pilaf. After a long internet-rabbit-hole search, I decided to mainly stick with this recipe from Olga's Flavor Factory (ironically, the blog is Russian, not Uzbek, but I swear, this was the most promising recipe to start with). Traditionally, plov is made with lamb or beef, for which I substituted chickpeas. (Chunks of seitan would probably be better if you wanted it to be really authentic, but since I'm vegan and nightshade-free, I never really bother with authentic, and chickpeas are what I had on hand.) Her recipe is also enormous, so I halved it. So here are the ingredients I ended up with:

Chickpea Plov
Serves 3-4, depending on how hungry you are!

2 Cups (or 1 can, which is a little scant but fine) Chickpeas
2-3 Tbsp olive oil
1 red onion, chopped
2 carrots, shredded
salt
1/2 tsp pepper
2 bay leaves
1.5 tsp cumin
1/2 tsp turmeric (this was to substitute in color for the paprika she uses)
A generous shake of ground allspice
1.5 Cups rice (I used brown basmati for extra flavor)
3 Cups water
1 head garlic, most of the papery skin peeled away (as much as you can with just rubbing it)

I sautéed all the veggies and spices together first, until the chickpeas started to brown, to give everything lots of flavor: 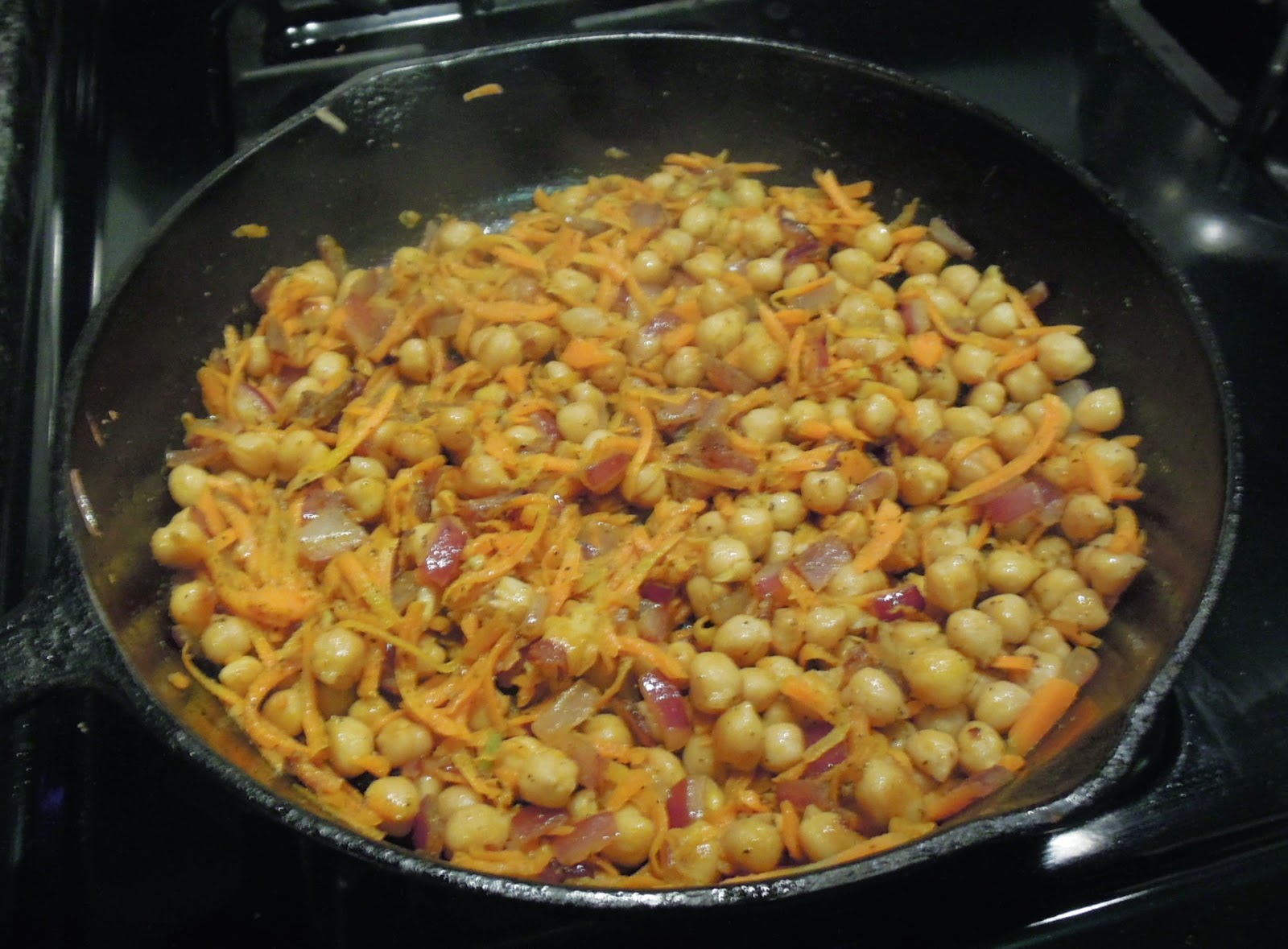 From there I followed the directions from the original recipe: add the rice, stir to mix it all together, then add the water, lower the heat, and cover. 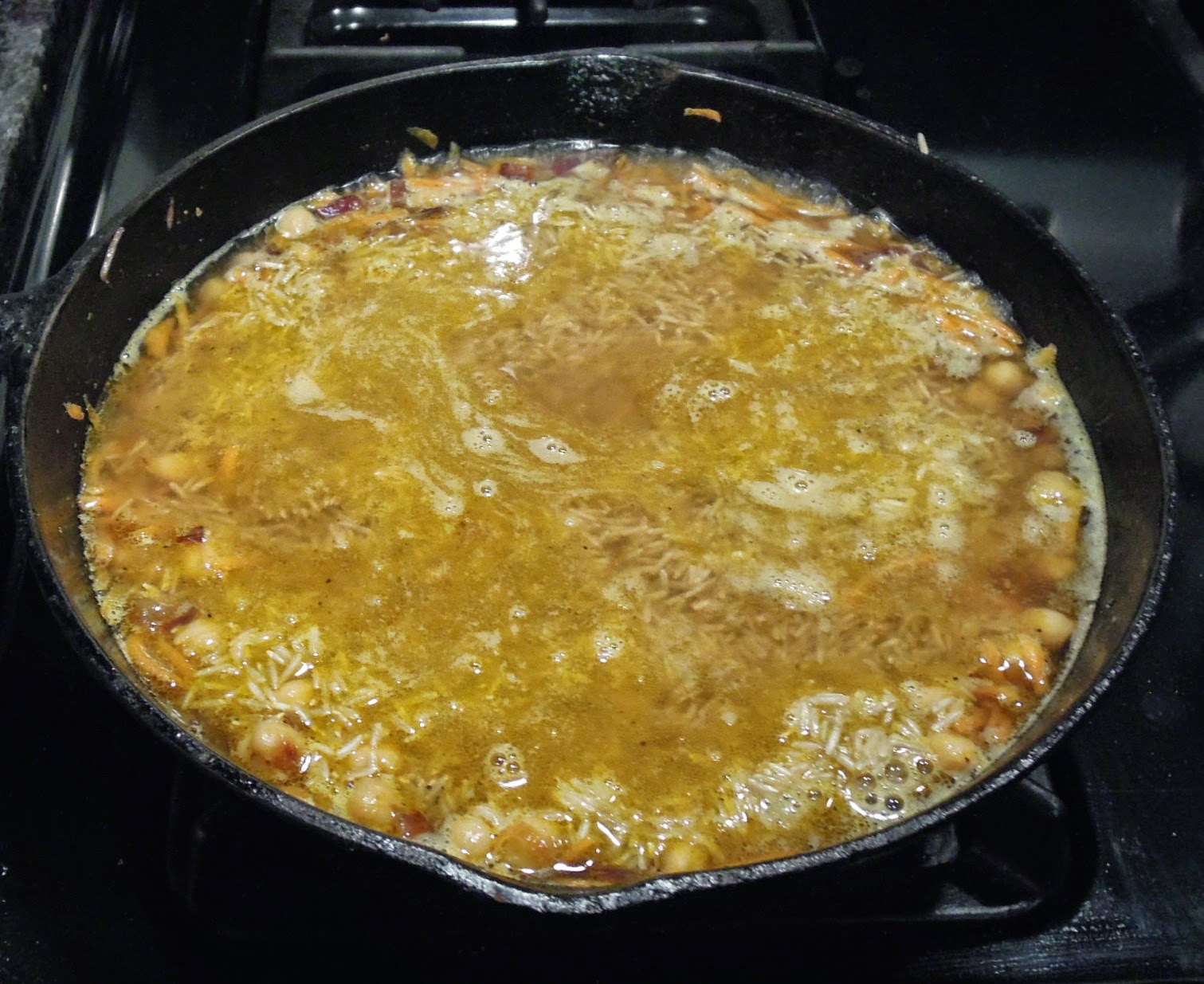 And here's the coolest part, the "roasted" garlic. In the last 10-15 minutes of cooking (so if you're using white rice, pretty much as soon as you cover it--if you're using brown rice, after about 15-20 minutes), you put an entire head of garlic right in the center of the pilaf, so it steams and gets soft and creamy on the inside--just like roasted garlic from the oven, but less messy and in way less time! I could not believe how cool this was, and have done it with other dishes now. 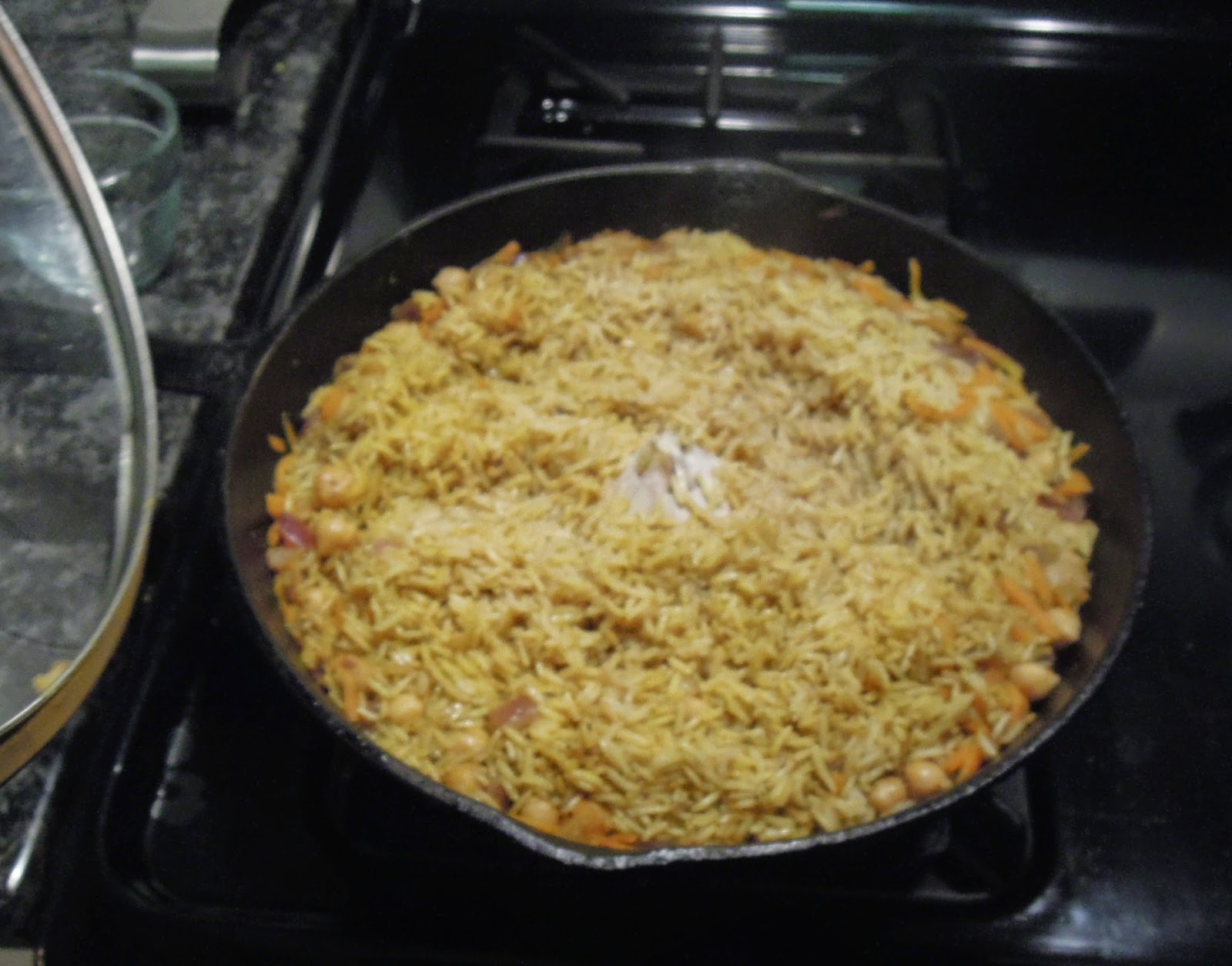 There it is! Hidden in the center of the plov! At the time I was really worried about the garlic burning or sloughing off its skin into the rice, but it all worked out just fine.

The tashkent salad (or is it supposed to be salad tashkent? I do not speak Uzbek so I have no idea) was a veganized version of this recipe from Tasty Arbuz. Tashkent salad is basically a creamy slaw made of radishes and tongue, which, you know, super not vegan. (Have any of you read Hugo Hamilton's memoir The Speckled People? There is a tongue-as-food-related scene in it that is incredibly well written... and it describes how gross the whole family found it. If I were still doing my "food from books" series, this would be such a good one!) But I had some leftover baked tofu from a previous dinner, which, thinly sliced, was a perfect tongue substitute. And I used vegenaise instead of mayo, and everything was fine!

Verdict: I would definitely make plov again, and am so excited about this "roasted" garlic technique. As for the tashkent salad, it was fine, but essentially a radish slaw, for which I don't really need a specific recipe in the future.

Have you ever had Uzbek food? Is there any dish from that buzzfeed list you'd like to make/veganize? Keep me posted!
Posted by Sarah P at 9:14 PM 6 comments: