I love food and I love to read. As a result, the first entry of each month, I'll combine these two interests in a post about food from literature. I'll mostly be sticking with books from classic literature, so you're likely to know the storylines anyway, but just in case you don't: warning: there may be spoilers ahead. 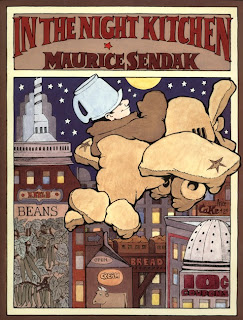 This week is Banned Book Week, a week which, according to the American Library Association, "highlights the benefits of free and open access to information while drawing attention to the harms of censorship by spotlighting actual or attempted bannings of books across the United States." You can read more about Banned Books Week at their website, and at the websites of all their affiliates.

Find a list of the top 10, 50, or 100 books that people most often want banned. You will be shocked. People aren't trying to ban, say, books on how to build bombs. No, they want to ban books most of us read in middle and high school, ones we considered boring. No specific type of book is left out of these lists: classics, books written last year, books by minority people, books by old dead white men, fiction, nonfiction, poetry, adult books, young adult books, children's books. Some examples: The Adventures of Huckleberry Finn, The Catcher in the Rye, To Kill a Mockingbird, The Bridge to Terabithia, Of Mice and Men, The Scarlet Letter, pretty much everything by Toni Morrison, And Tango Makes Three (a picture book retelling a true story in which two male penguins raise a baby penguin). And that's just scratching the surface.

To me, the most disturbing thing about these lists is a large portion of the books people want banned are for young adults or children. Shel Silverstein's books of poems, which I thought were too silly even when I was in grade school--controversial because they could be bad influences. Other books that people want banned because they contain seditious and/or rebellious behavoir: James and the Giant Peach, Catcher in the Rye, Harriet the Spy, the Lorax. 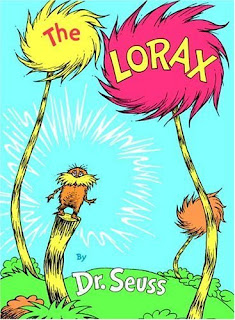 THE LORAX!!! A HUGE number of books are also controversial for "promoting witchcraft" or containing occult references: Harry Potter books, Narnia books, The Lord of the Rings books, A Wrinkle in Time. And any book, children's or young adult, that contains even the vaguest of references to human bodies and/or human relationships, becomes controversial for showing "sexuality" or "sensuality." Also, several books on these lists are controversial simply because they're scary for kids, or depict cruel behavior.

The reasons people want to ban books are, mostly, the exact reason those books shouldn't be banned: they depict religions or politics people may not agree with, sexism, racism, violence, sexuality, just plain meanness. But so does the world. These books exist and survive because we see our world and sometimes ourselves reflected in them. And if we don't like what we see, that's okay--these books could be perfect learning opportunities. If you are very strictly religious and you're afraid your kids will get ideas about witchcraft from reading Harry Potter? Don't try to keep your kids from ever seeing "the occult;" tell them what makes you uncomfortable about the idea of them reading about it. If you're afraid that rape and racism in Toni Morrison's books will scar your teenage daughter for life, remember that these forces are still active in the world--she should know about them and you should talk about them. (Besides, she's probably already seen Law and Order SVU, which is as disturbing and isn't nearly as well written.)

Anyway. Read a banned book this week. The lists are full of good ones.

As promised, today we'll talk about In the Night Kitchen by Maurice Sendak. Sendak is a favorite with the banning-book-people: not only does everyone seem to want to remove this book from libraries, but Where The Wild Things Are is also controversial (because Max is mean and the monsters are scary). When I first heard In The Night Kitchen was controversial, I thought I understood why. Let me do a plot recap, you can see for yourself why you think this book is ban-worthy:

Mickey, a little boy, is in bed, when he hears a noise downstairs. He wakes up and suddenly floats out of bed, out of his pajamas, and drifts into a world where everything appears to be food-oriented: the night kitchen. He ends up dropping into a bowl full of batter. It's the batter for morning cake! Three huge bakers with little mustasches start adding ingredients to the batter. 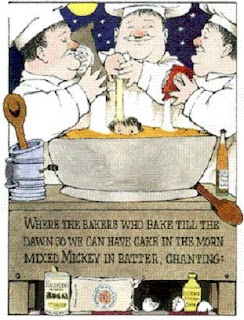 For some reason the bakers assume Mickey is the milk, which completes the cake. Now to bake it! But just as they put the cake in the oven, Mickey pops out and announces: 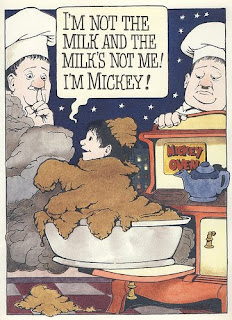 Mickey, now wearing a cake-batter suit, kneads some dough into the shape of an airplane. 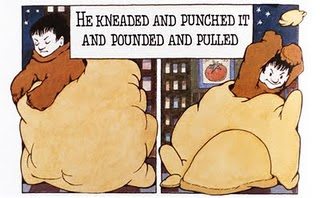 He uses his airplane to fly up to where the milk is and plays in it, washing off his batter suit. He pours the milk into the cake. Voila! The cake is NOW ready to be baked! He cheers, then slides down the side of the milk bottle, sliding all the way back into his pajamas and into bed. THE END.

Okay, my first thoughts when finding out this was a banned book? I've heard interviews with Maurice Sendak on NPR (here are two of them). The Sendaks, who were Jewish, escaped Poland to avoid being persecuted by Nazis when Maurice was a young man. His father saved money to bring over all their extended family: he got all the aunts and uncles from Maurice's mother's side (who, Sendak says, became the monsters in Where the Wild Things Are), but by the time he had money to bring over over his own family, they had already been taken to concentration camps. And killed. SO, with this knowledge in mind, I thought the whole "little boy being put into an oven by bakers with little black mustasches" thing could be controversial.

Nope. Censors didn't think of that. Okay, so I know Maurice Sendak is gay, maybe some homophobic parents don't want their children to read his books? Nope, apparently that's okay by the censors too.

You know why this book is banned?

BECAUSE MICKEY IS NAKED FOR HALF OF IT. 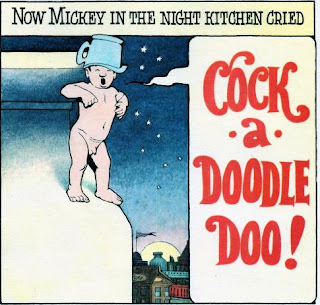 Are you serious?! Okay, first of all, half the children to whom this will be read are boys. THEY know what they look like without pajamas. Second, even if the little girls reading this book haven't already seen their brothers in the bathtub or having diapers changed, they know boys and girls are different. Are parents banning this just because they want to avoid an awkward anatomy conversation? Finally, COME ON. A naked little boy? THAT is offensive? Book-banning parents, how on earth did you raise your kids if you find naked children offensive?

Anyway. I liked the idea of a "Morning Cake," which is what the bakers in the Night Kitchen bake, so I found a recipe called "Country Morning Cake" and adapted it. (My version below is wildly different from that one, but I felt like I should give them credit.) This is a simple version of a coffee cake. It comes together quickly and, depending on how much sugar you use, can be pretty healthy. I tried it with half whole wheat pastry flour and it tasted great.

I'll mention now, the original recipe called for an 8" round cake pan. I recommend an 8x8" square baking dish, mostly because I don't have an 8" round pan. But recently I used a 9" spring-form pan beacuse I wanted it to look cute to serve to friends, and it came out nice, just shorter: 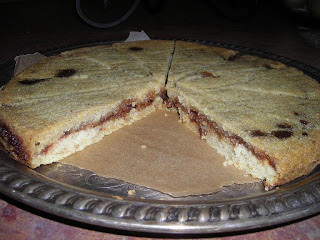 Mickey's Morning Cake
This cake itself isn't overly sweet, but the filling is very sweet. If you want to cut down on sugar in the recipe, you can reduce the amount of brown and white sugar in the filling by a tablespoon each. Serves 6-10, depending on how large you cut the slices and/or on how hungry everyone is.

In a mixing bowl, combine the non-dairy milk and vinegar. Stir, then set aside to curdle.

In a small bowl, combine the 1/4 C brown and white sugars with the cinnamon. Mix them well. Set this bowl aside.

Return to the milk mixture. Add the water, flax seeds, canola oil, sugar, and vanilla. Stir (or whisk) well until all ingredients are combined. Sift in the flour, baking soda, and salt. 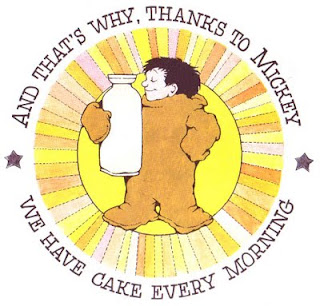