I didn't know what marmalade was when I first read the Paddington Bear books as a kid. I assumed it was an English thing. And then the first time I tried marmalade, I was blown away. It's like other jams/jellies, but it's A MILLION TIMES BETTER. I have tried many kinds of marmalade, but I have never made it myself. 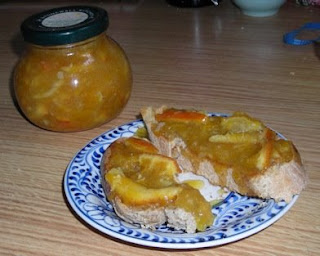 (Pictured on homemade wheat bread)
I got the recipe from Martha Stewart, but I changed it (because I never follow recipes). I halved it, first of all, which I recommend because it makes so much. I also used different oranges: two "normal" oranges and two tangelos.* But also, the amount of sugar in Martha's recipe is astronomical, so I cut it down to 1/2 cup for every cup of goop. I still thought that sounded like a lot, but the mixture was really sour, so I went with it. And it tastes delicious. And while I will probably never make it again because it's rather tedious, I am really glad to have tried it once!

Um, by the way, I now have an absurd amount of marmalade, way more than I have toast. Any recipe recommendations?

I also relied on a Martha Stewart recipe for Valentine's Day! 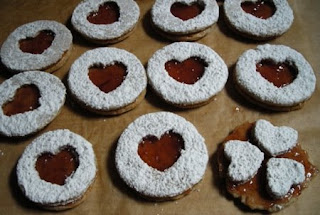 These are her Pecan Linzer Cookies with Cherry Filling. Again, I halved the recipe, and to veganize it, I used soy yogurt instead of egg. Also, I didn't strain the jam because that was too much work. But I didn't alter anything else (no whole wheat flour, no agave--their point was to be decadent, not healthy). They were GORGEOUS and tasted like cookies I used to get at the corner bakery when I was little.

I don't have cookie cutters, so I used a glass to cut the rounds and a knife to cut out the hearts. 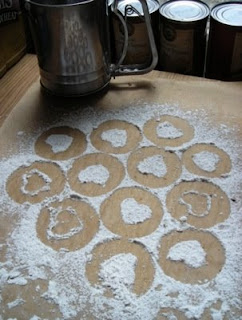 Sprinkling them with sugar was fun AND pretty.

But I do not rely on Martha Stewart for everything. For example, I had some dried (white) lima beans taking up space on my shelf for to long, so I cooked them up... and realized I have no idea what to do with lima beans. So I made up a dilly lima bean hummus! This will also work with any white beans, like cannellini. 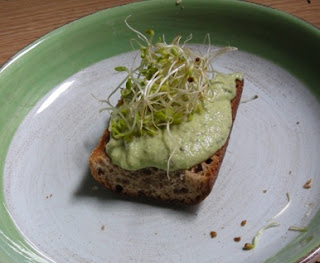 Blend all ingredients. It will be gross and goopy, but such is hummus.

It's good as a dip or a sandwich spread. You can also water it down and use it as a sauce for middle eastern and/or greek meals (like tahini or yogurt sauce, but healthier).

*-I do want to remind you all to use organic food whenever possible, but especially when you are using a food's peel/rind/zest.
Posted by Sarah P at 1:08 PM 4 comments: