One of the reasons I wanted to move out to Waltham, our city/suburb, was that I wanted to be able to have a house and outdoor space of our own. I wanted a garden and a yard where our future kids could play. We couldn't get that in the middle of Cambridge or Boston. The lot we ended up with is relatively small, but the front is big enough for some flower beds, and the back yard had a small green space and the edge of a rocky hill. It looked spacious enough when we had first seen our place in late winter, but when the back yard started to fill in with weeds and poison ivy come spring, I realized we actually had very little useable outdoor space.
That lush green jungle is primarily just rocks, broken glass, a large dead tree, and poison ivy. Definitely not useable.

We paid landscapers to remove the worst of the brush last fall; I had gotten a bad case of poison ivy last summer (I used to be immune! but no longer) and didn't want to mess with it again. We were then hoping to have the landscapers terrace the backyard a little, but when we got the estimate for the work, it was about $10,000. We could definitely not afford that! I decided to try working on it myself. (After paying a professional to take down the dead tree. I knew I couldn't do that myself.)

I had no idea what I was doing. I have never landscaped or done anything close to it. Mowing our lawn last summer was the first time I'd ever mowed. The only "garden" I've ever grown was the pots of herbs I grew on the fire escape of our last place. But I am not one to let inexperience stop me! Have you ever heard the silly kids' joke, "How do you make a statue of an elephant?" The answer is "Take a block of stone and chip away everything that doesn't look like an elephant." This was the approach I decided to take with the backyard. I would chip away everything that didn't look like "my" back yard.

I got started in late March/early April, after the snow had melted but before anything could grow. I wasn't sure what I would do yet, but I knew that the first step was to clear away all of the leaves, sticks, and branches so I could get an idea of the land I had to work with. 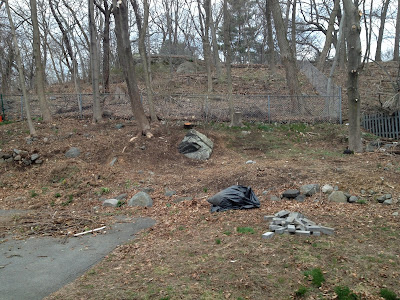 Partially cleared. Unfortunately I didn't take many "before" pictures. This was the worst part of the project. There were decades' worth of leaves to rake away, wrapped around decades' worth of rotting branches and garbage. More than half of the yard was covered in winter creeper, an annoying, invasive vine that kept getting caught in the rake and making my job even harder. I had to pull out all the vines and runners and roots, some of which turned out to be poison ivy roots. I couldn't tell at the time because it was too early for the poison ivy to grow leaves, so it blended in with the winter creeper runners. After my first rash of this season cropped up, I started wearing long sleeves, arm warmers, and my work gloves, and washing myself and all of my clothing obsessively after each time outside. There was also a huge amount of broken glass throughout the yard, which I removed shard by shard.

While I did find a couple 3-4 hour chunks of time on weekends, the vast majority of this work was done between when I got home from work and when the sun set, which was about an hour a day in April. And because of social life stuff, I couldn't be home before dark every day. So it took me the whole month to clear the back yard, one hour at a time. 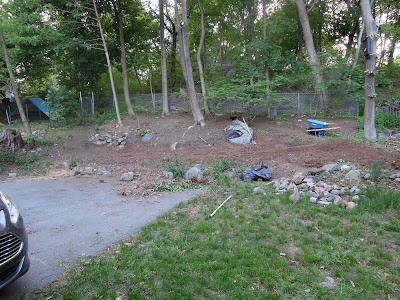 All cleared. Now that I had an idea of the shape of things, I could sort of envision how best to make it useable space. I imagined two distinct levels: one larger, even one on the bottom, where someday I'd have a garden, a seating area, and a bird bath. The other, upper level would be smaller, left sort of wild, with trees and eventually flowers. I would make a path between the two terraced levels.

I didn't know how exactly that would work, but I liked the idea. Online searches for the best way to level one's land mostly gave me answers like "rent a tractor" or "hire a landscaper," so I was on my own. I did find that for small leveling jobs, people used what a bunch of sites called a "grub hoe" and a dirt rake. I could have gone to the hardware store for these, but first I went to my dad. He had an extra dirt rake (this is the best part about being from a really rural area: of course my dad had an extra dirt rake) and while he only had one grub hoe, he gave it to me because he "never wants to have a reason to use it again." (This did not bode well for how laborious the work ahead of me would be.) 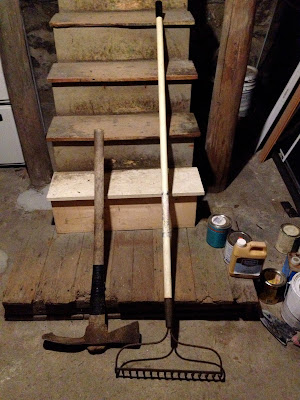 What I call a grub hoe, on the left, is also called a grubbing hoe or hoe axe. It has a hoe on one end and an axe head on the other. You use it to hack at the ground to dig and loosen up the dirt you want to move. It belonged to my grandfather, who was a farmer. It was really exciting and sort of sappily symbolic to me that I would use the same tool he used on the land where I grew up to improve my own home and land. The dirt rake, on the right, is what you use to move the loosened dirt around. These were my buddies for weeks of work and remain my favorite yard work tools.

Again, I could only put in about an hour a day of work, and even then only a few days a week, but I hacked at and raked the ground, pulling out winter creeper, poison ivy, and locust tree shoots as I found them. (I am proud to say that I seem to have eliminated the first two, but those darn locusts are still my enemy.) 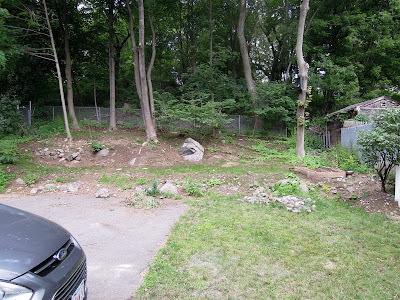 The finished version! At least, as finished as it's going to get this year. I sprinkled some grass seed around just to have something growing out there, and other plants have sprouted up. I also planted a garden! A real one! That wild rabbits love! The bottom area is mostly leveled and larger, with plenty of space for our garden (which will hopefully be twice as big next year). Someday we'll put a bird bath and a seating area back there, too. The top area isn't quite as leveled as I had hoped it would be, but there are so many roots from our trees and the trees on our neighbors' property that it was really difficult to move the earth around. It is flatter now though, so it's easier to walk on, and I made a little path between the layers on the right side. 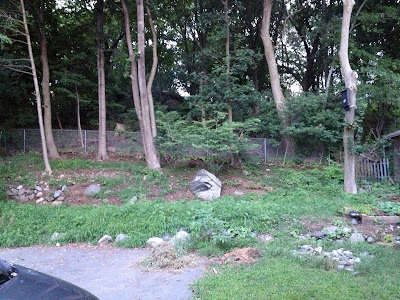 It's getting overgrown, but I just can't spend much more time on it this year.  It's still a work in progress, but I'm so happy with how far it's come!
Posted by Sarah P at 10:24 PM 2 comments: