I love Indian food. Because I grew up in a small town, I never tried it until I was 18 or 19, when I went to college and joined our Hindu Student's Association--we'd go out for Indian food as a group on our occasional mandir visits, and we'd have it for every event we hosted. My friends in the group introduced me to different kinds of Indian food, and I loved it all. I was already vegan at that point, and it is such a vegan-friendly cuisine--when I lived in London, and later when I went to Ireland, I ate a LOT of Indian food because that was often the best option for me there.

And then, by the time I was 22, I developed my full-blown nightshade allergies, rendering Indian food among my greatest culinary enemies. Indian food that doesn't contain hot peppers, tomatoes, potatoes, eggplant is very hard to find! Especially since most Indian spice mixes involve cayenne or hot pepper of some sort. (Do you know what my FAVORITE Indian dish used to be? Baigan bharta, which is spicy eggplant in tomato sauce. All nightshades!!! I miss it.)

So I can't go out for Indian food anymore. But I can--and do--adapt some of my favorite recipes for myself at home. I make my own curry powder , and I make a lot of chana and chole dishes (because of my love for chickpeas). Many recipes are easy to adapt to nightshade free cooking just by leaving out the hot peppers.

But I miss the breads. Warm, oily breads right from the oven or fryer--those are much harder to replicate at home than curry or rice.

But I live for a challenge! Here are some Indian breads I have made at home!

Naan is the usual bread you get at Indian restaurants; it's a soft, flat, oven-baked bread. Most recipes call for yogurt, so it's rarely vegan. Definitely one advantage to making it at home! 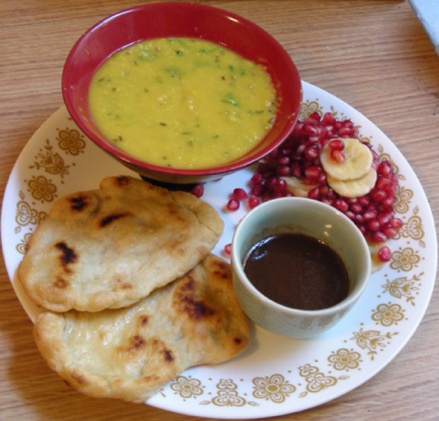 Served here with homemade dal, a tamarind sauce, and fruit. I didn't use a specific recipe for it; I just googled "naan recipe" and read a bunch of the results, then took the amounts and techniques that appeared most often across all the recipes. It took a bit of time to make (since the dough sits over night), but surprisingly little work. I'll definitely make it again!

Bhatura was a bit more of a challenge for me, since it involves deep frying and I'd never had it before, so I didn't know if I'd gotten it right at first. It's a soft, delicious bread, with a slightly crispy outside because it's fried. 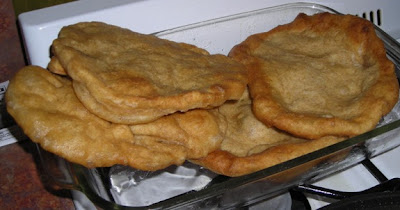 I got the recipe from the Cookery Corner blog. I went with all all-purpose flour, and used soy yogurt in place of the regular yogurt. It also takes some time (has to sit for at least 4 hours), but it is such a delicious recipe. 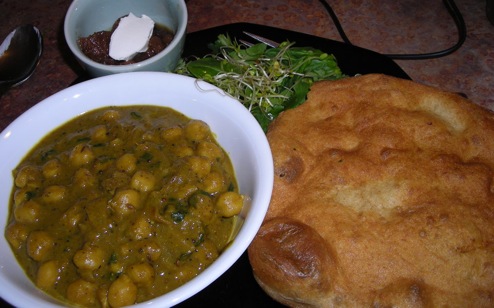 Because I don't like to deep fry (more for reasons of mess than of health), this is a special occasion food, but ohhhh my goodness, it does indeed make an occasion special. This is now my favorite Indian bread.

Next up, Paratha! If you've never had paratha before, it's basically a whole-wheat tortilla with a little more oil. (I think it's the same thing as Roti. I can't tell the difference, anyway, but maybe I am a philistine for thinking this?) It's quite good, and I've made it plain a couple times, but the real reason I'd got through the effort of making paratha is to stuff it! You can stuff it with any number of fillings, and it's always excellent.

For the dough, I use a recipe out of Yamuna Devi's Lord Krishna's Cuisine cookbook. You can find it online on A Cook at Heart's blog. (I used canola oil for the ghee, by the way, and like the blog writer, didn't use a full 1/2 cup in the dough. I think I used 1/3?) I made up my own filling--it's sauteed onions, spinach, and garam masala. 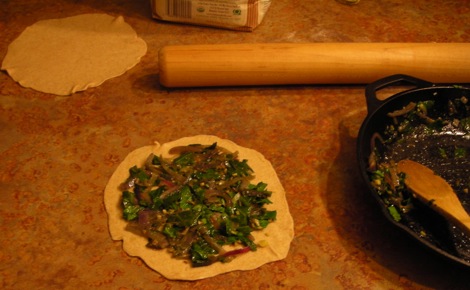 I know this picture is badly lit, but I like that you can see the whole process: the empty-rolled out dough, the bottom layer with the filling on it, my filling pan, a bag of flour, the rolling pin--it tells you everything you need to know! Hee. The next step is to put it in a well-oiled pan over medium heat, then brush oil over the top. 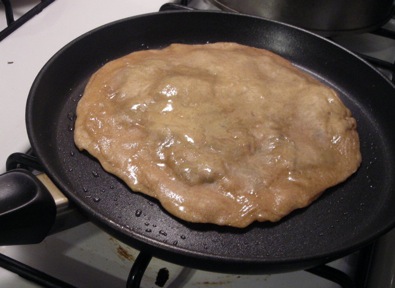 The sides cook pretty quickly; a couple minutes on each side. Then it's ready to eat! 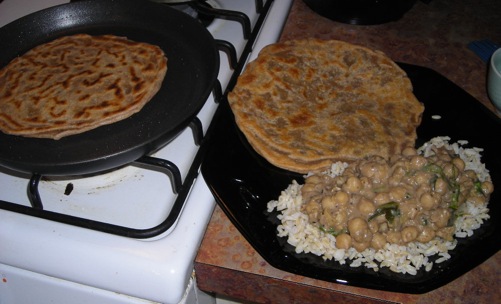 Finally, though Pappadum isn't really a bread, and I didn't actually cook it so much as heat it up, pappadum is one of the other things I miss about Indian restaurants. So crispy and light! And perfect to dip into the sauces they always have at the table (ohhhh do I ever miss that oniony sauce, and the tamarind sauce...). 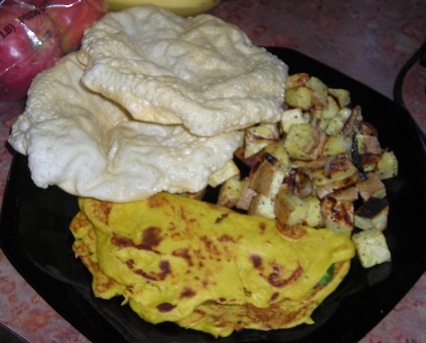 Pappadum, with an omelet (from Vegan Brunch) and sweet potatoes. These come in a box, and all you have to do is fry them or heat them over an open flame. I think you can microwave them, too, but I don't have a microwave. Though there are many different brands that are all good, I like this brand (Sharwood's), because they're very plain--no suspicious "spices," which, because this is Indian food, inevitably means hot pepper of some sort.

Those of you who aren't nightshade-free can probably get many of these things already at Indian restaurants, but I do have to say that it feels awesome to make them yourself, too. I recommend trying it! (And then you'll feel even more grateful when you order them out, because you'll know how much work went into the awesome food in front of you.)
Posted by Sarah P at 10:25 PM 2 comments:

The fiance and some friends and I like to travel to one theme park per summer for some prime rollercoaster riding. This year, the trip was to Hershey Park in Pennsylvania.

I'm not a big fan of candy, so it wasn't a magical wonderland of sweets for me, but I was surprised by how much of Hershey Park is doable for vegans. In the candy category, Jolly Ranchers and Twizzlers and I think a couple other iconic Hershey candies are vegan, so they've got you covered if you're into the whole candy thing.

Beyond candy, the biggest reason to go to Hershey Park for me is the ROLLER COASTERS! They have eleven. The fiance and I made it to ten of them, but opted out of the one where people can squirt you with water jets as you go.

Any sort of trip leaves me anxiously wondering "What will I eat?" Hershey Park has a strict "no outside food" policy, so I was a little worried about finding actual food for myself there at first. But the Hershey Park website is a vegan/allergic person's dream come true. On their "Food" page, they list the ingredients for all of the food served in the park. Which meant, from a brief visit to the website, that I knew exactly what I would be able to eat, from meals to snacks to vending carts. (Especially exciting: chocolate-dipped bananas, pretzels, sugar-glazed nuts, and kettlecorn.)

With the help of their website, eating vegan at Hershey Park is pretty easy-- you'll end up with a decent selection of places to eat. Being vegan and nightshade-free, however, you have pretty limited options. Koshermart is your best bet--it's a kosher food stand that serves falafel and some other vegan (as well as non-vegan) fare. It looked okay on the website, with the exception of "spices" in some of the foods, which can contain nightshades. I emailed Hershey Park's to ask about it, very quickly received an email from the food concessions manager promising to look into the "spices" for me! Within a few days, he had talked to the vendor that provides that food and could assure me that there are no nightshades in the "spices" I'd asked about. But the vendor didn't tell him what the spices were exactly, and he was concerned it might not be a good enough answer for me, so he offered to write me a letter of exemption allowing me to bring food into the park. He was so nice! I told him I would be fine the falafel, thanks. The next day he emailed me back because he remembered I said I'd be there "on the weekend," and wanted to make sure I knew Koshermart is closed on Saturdays--he was worried I would go on Saturday and end up with nothing to eat. (My friends and I went to the park on Sunday to avoid lines, so no problem.) The level of attention, concern, and willingness to work with me that I received from Hershey Park staff members even before my arrival made for really safe and happy eating when I did get there. 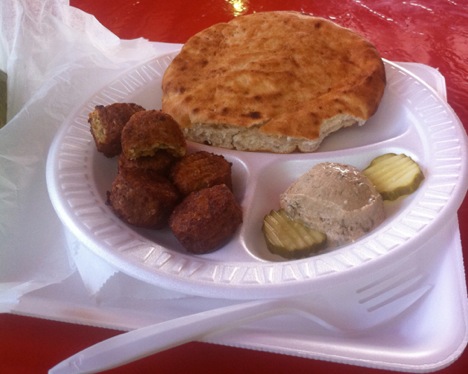 Falafel! They give you a lot of litle ones--one of my friends on the trip called them "falafel tots." The pita bread was vaguely sweet, which made it unexpectedly delicious. The tahini "sauce" is actually almost as firm as hummus--that's the ball on top of the pickle slices. It was tastier than it looked. It wasn't a gourmet meal or anything, but it was good. And I knew I wouldn't be poisoned by my meal! 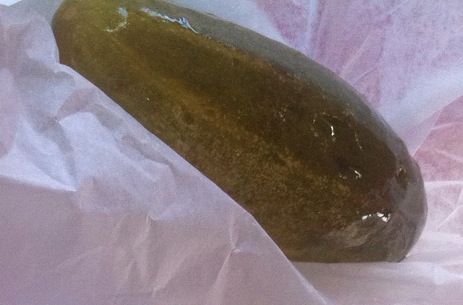 The menu claimed they only sold half-pickles, but they gave me A HUGE WHOLE ONE. Yessss.

So, the moral of this story is that with a small amount of advance research on the Hershey Park website, a vegan, even one with unusual food allergies, can eat there easily. And if you have any questions or concerns about the food, the employees seem really committed to helping you work something out.

Also, the rollercoasters are great.
Posted by Sarah P at 11:49 PM 2 comments: