We'll get to the deviled eggs in a moment, but first a small announcement: I'm pregnant! I'm at 17 weeks (4 months). I am, of course, vegan, and my doctors are totally fine with every aspect of my pregnancy. There have been many great vegan bloggers who openly blogged about their pregnancies well, so I am not interested in doing that myself at the moment, but I am happy to answer any questions people have.

The biggest change for me since being pregnant is how much more often I get hungry! I fill up easier, which means my meals are often smaller, but my body still needs more calories per day, which means I'm snacking about every hour or two. Women should up their protein intake during pregnancy, so I try to make sure that at least some of my frequent snacks are protein-rich. But after 4 months, all my usual snacks are starting to bore me. So when I found Lagusta's Luscious recipe for vegan deviled eggs, I had to try them!

I had all the ingredients on hand, but I do not have egg-shaped molds. I have these though! 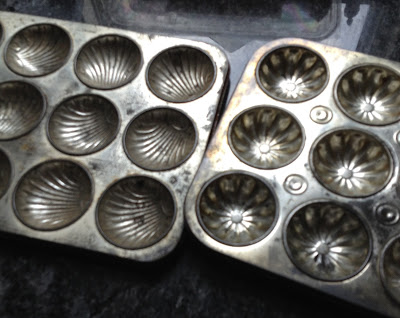 And I don't mind if my "eggs" are shell or dome shaped.

The "egg white" recipe calls for soy milk, though Lagusta  and the comments on the blog entry all say that almond milk makes for a firmer and whiter white. I went with soy to make sure the eggs were higher in protein, but I did notice a little of the graininess she mentions. 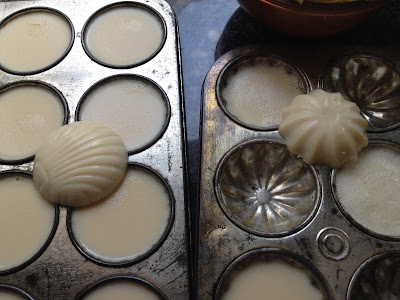 They hold up well, but next time I might use a little more agar (2.5 tsps?) to make them even firmer.

And then I filled them! Before you judge how they look, remember that my eggs are upside-down shells. I also spooned in the filling instead of piping it in because I am lazy. 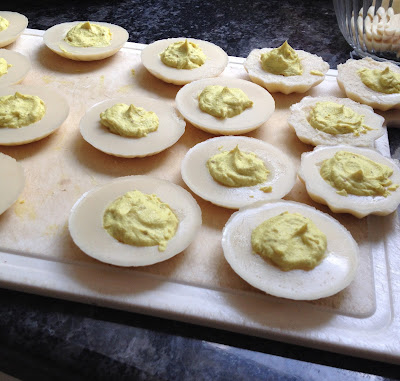 The filling is pretty good, but it is WAY TOO SALTY for me. My mother's deviled eggs always had a lot of mayo, so I did up the amount of vegenaise, which could contribute to the over saltiness, but when I make this next I'm going to skip the whole 1 1/4 tsp salt and just salt to taste after all the other ingredients are in.  It's okay in combination with the whites since the whites are a little bland, but the whole deviled egg is still a little saltier than I'd like. 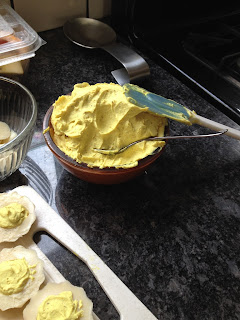 And holy cow, look how much filling is left! I mixed some of it with the scooped-out parts of the whites for an egg salad that I'll have on bread for lunch. Lagusta says that it makes a good dip, but like I said, it is WAY too salty on its own, so I'll probably blend in some cashews before I can use it straight.

Despite the saltiness, I liked this recipe a lot, and will definitely make it again!
Posted by Sarah P at 10:58 AM 3 comments: