tofu in a hole

There's a classic American breakfast food that I never got to try, or even really knew about, before going vegan. Though it's commonly known as "Toad in a Hole," it is really different from the British version of Toad in the Hole. The British version is Yorkshire pudding with sausage. The American version is toast with a hole cut in the center into which you add an egg. I looked it up online and discovered that Toad in a Hole is also known as Egg in a Basket, Bird's Nest, One-eyed Jack, and Gas House Egg. Do you all know about this dish? Do you have a different name for it?

Anyway, this morning the husband wondered if I could try to make a vegan version. I've seen one recipe for a vegan version, but it takes a lot more time/advanced preparation than I had this morning... so I rose to the challenge to create my own. (You should still click that link, though, if not for that recipe than for the list of different names for Toad in a Hole. So cool!)

So, here's my version. 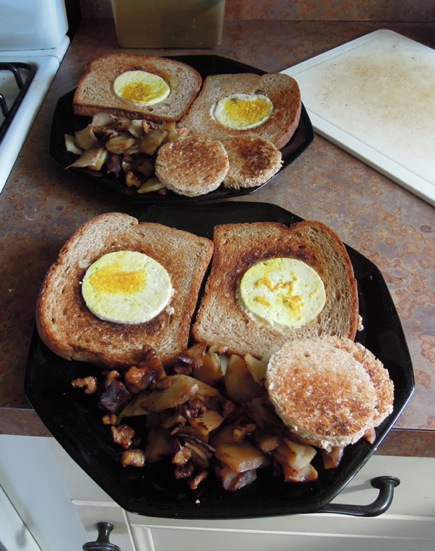 I fried up the tofu with my normal tofu "fried egg" method--I rub a couple pinches of black salt, asafoetida, and pepper on tofu, then saute it in oil till the edges start to get a bit golden. Making the circles left me with some tofu scraps, which I blended with water, arrowroot, a bit of nutritional yeast, and the same fried-eggy seasonings to make a binder that would stick the tofu to the bread. 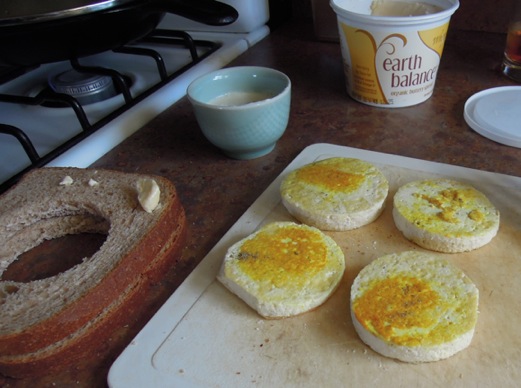 I mixed a spoonful of the binder with turmeric to make the little yolks on top, but that's only for looks. The binder mixture is in the little green cup.

Then all I had to do was saute the bread: 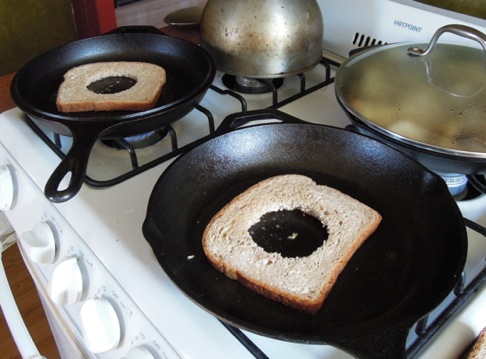 Once I flipped the bread, I put a quarter of the blended mixture into each hole, then quickly added the tofu circles. A minute or two longer, and it was done! 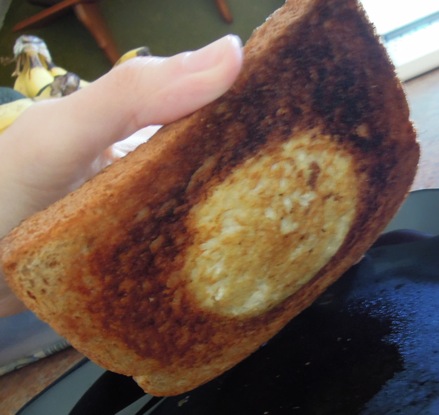 The arrowroot mixture helps keep the tofu in the hole.

This breakfast was delicious, and I no longer feel like I'm missing out on an American breakfast tradition! So now I'll share it with you. 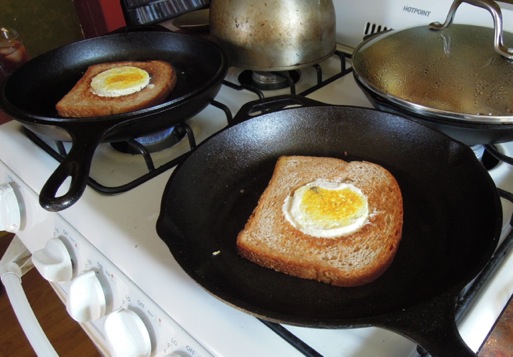 Tofu in a Hole
Serves 2, is easily doubled/tripled/quadrupled. Black salt is totally worth your time/money if you like an "eggy" flavor to things; it has a sulphur smell that becomes milder with cooking and really helps things taste like eggs. Asafoetida is a powder that smells half garlicky and half oniony, and also helps with egginess. You only use a REALLY TINY amount at a time. Both are available at any Indian grocery store, or online.

Using a glass or small biscuit cutter, cut a hole in the center of each piece of bread. Use the same glass to press into your tofu to make circles that will fit in the bread. You can either cut the tofu into 4 slabs and then use the glass on them, or you can make one big tofu cylinder and cut that horizontally into 4 circles. It's up to you!

In a blender, combine the leftover corners of the tofu, the 1 tsp arrowroot powder (a scant 2 tsps if you don't use nutritional yeast), the water, nutritional yeast, a few pinches of black salt, and a tiny amount of asafoetida. Blend until smooth. This is your binder mixture. While it's blending, sprinkle a bit of black pepper, black salt, and asafoetida over the tofu slices, and rub into both sides.

Heat 1-2 tsps of margarine in a pan on the stove over medium. Saute the tofu circles for about 3 minutes, until the bottom is starting to turn golden. Flip, repeat. While the tofu is cooking, butter one side of each slice of bread.

(Optional, for the yolk [which is for looks only]: Before flipping, take a small spoonful of the binder mixture, and mix a sprinkle of turmeric into it. Put a small dollop in the center of each tofu slab, then flip and cook as directed above.)

Remove the tofu from the pan, add a little more margarine as necessary, then put the unbuttered side of the bread down in the pan. It should begin to brown in 3 or so minutes; check. Once the bottom has browned, flip it. Once you've flipped it, add a quarter of the binder mixture (should be a little more than a Tbsp) to the center of the hole in the bread, then press in a tofu circle (yolk side up, if you did a yolk) quickly. The binder mixture will come up around the edge of the tofu, that's good! Allow to cook until the bread is browned, again, like 3 minutes. You have Tofu in a Hole! Or Tofu in a Basket. Or Gas House Tofu. Whatever.

This parsnip mixture went really well with it: 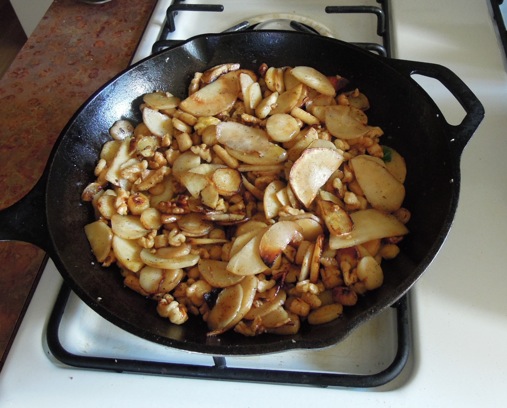 It's parsnips and walnuts, sauteed with a bit of olive oil, salt and a splash of maple syrup. Yummmm.
Posted by Sarah P at 9:53 PM 2 comments:

our vegan honeymoon in New Orleans!

My month of wedding posts is over, but I've got one more wedding-related post for you: our honeymoon in New Orleans! I've wanted to visit NOLA since I was 13 or 14, and while the husband has been there a couple times and enjoyed it, we wanted to go together! We had a really lovely five-day trip over Halloween weekend, and I'm sharing it with you... just in time for mardi gras!

We stayed at a hotel with a classy little balcony from which we could see Bourbon street. 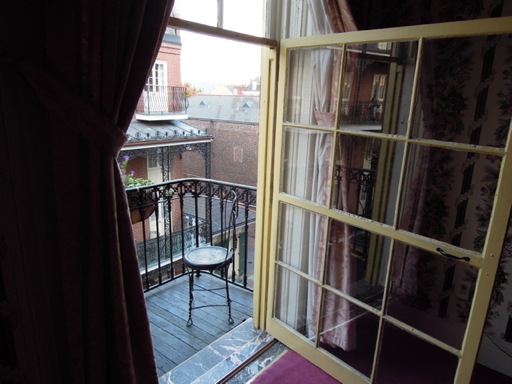 We got a suite with a little kitchenette, so we brought and bought breakfasty food and had all of our breakfasts in our room--mostly on our balcony.

During the day, we ventured around the French Quarter and beyond to see the sights--the botanical gardens, the museums, the cemeteries, etc. At night we checked out live music and the city's active night life. 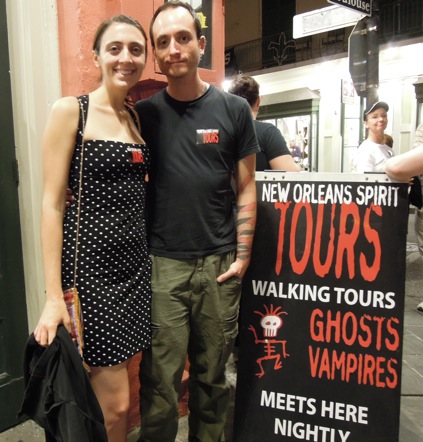 I even convinced Kevin to go on a ghost tour with me! It was fun and cheesy and not at all ghosty, but I learned a bit about New Orleans's history.

But everyone knows that New Orleans is full of things to do. What you may not know is that it's pretty easy to get good vegan food there, especially if you know where to look! I had done a lot of research beforehand; I'd been nervous that even if we found vegan stuff, I wouldn't be able to eat it (cajun vegetables and spices are almost entirely nightshades). But no! We ate really well in New Orleans. Let me show you!

First, if you want to get food for your hotel room or to carry around with you, GO TO THE NEW ORLEANS FOOD CO-OP. It had just opened when we went, and the husband and I couldn't believe how big and full it was, with all the vegan staples we could think of. The workers were friendly and lovely (as were all the people we met in NOLA, actually), and they told us it was the only co-op in Louisianna! Go there, support them, get awesome food. While there, we stocked up on breakfast foods and hotel room snacks.

Another necessity for breakfast: coffee! We mostly had some in our room, but we also had some good coffee out: 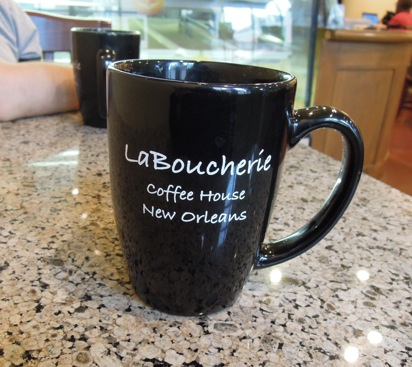 La Boucherie is more vegan-friendly than the name suggsts. They had soymilk for the drinks!

We had a really great lunch at Cafe Carmo. Almost everything on their menu can be made vegan--they have daiya and some vegan "meats." They also have vegan baked goods! 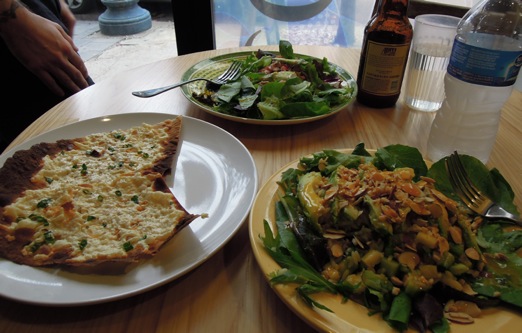 I got a "plain" banquette bread with daiya and a Carmo salad. (I had it without veggie ham, since some fake meats have nightshades). The husband ordered the Vegan Rico--under the greens is vegan pulled pork and melty daiya over a grilled plantain patty. Both of our orders were deeelicious.

13 Monaghan had a tasty Baked Tofu and Herb sandwich that was nightshade free without the tomato. 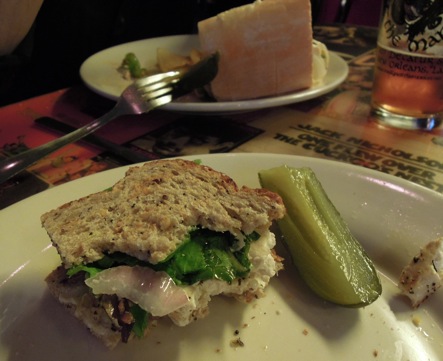 I was so hungry I ate half before remembering to take a picture. They have more options if you can have nightshades--including Tachos--TATER TOT NACHOS (vegan without the cheese and sour cream). Seriously, people, if you are able to eat nightshades, can you go order this and report back to me on how AWESOME it must be? 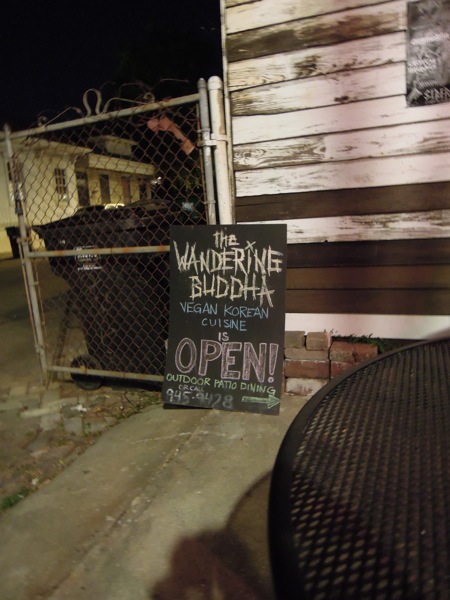 They operate out of the back of a bar (the Hi Ho Lounge), and you can either sit in the bar or on their patio out back. 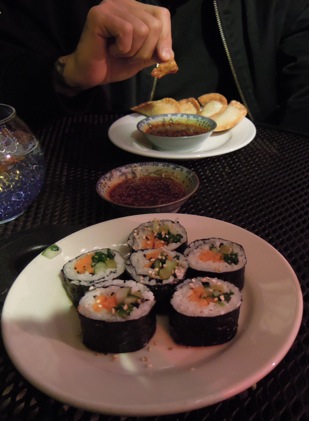 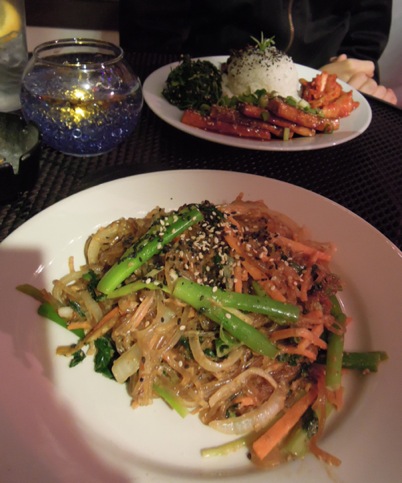 My entree was japchae--noodles with a sweet peanutty sauce. It looked boring when it arrived at the table, but it was flavorful and awesome. The husband got an AMAZING-looking braised tofu dish.

Because it was our honeymoon, we wanted to go out for one big, fancy, expensive dinner, so we went to Restaurant August. I'd read a yelp review that said they were able to accommodate vegans upon request. They were really attentive and great about my allergies. They modified their farmers' market tasting menu to be all vegan, and made us a delicious meal. 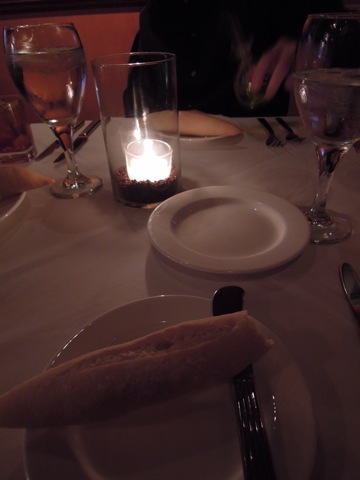 This bread looks like normal bread, but is some of the TASTIEST HOMEMADE BREAD I have ever had. Sorry the light is really dim in these pictures; blame it on fancy dinner mood lighting! 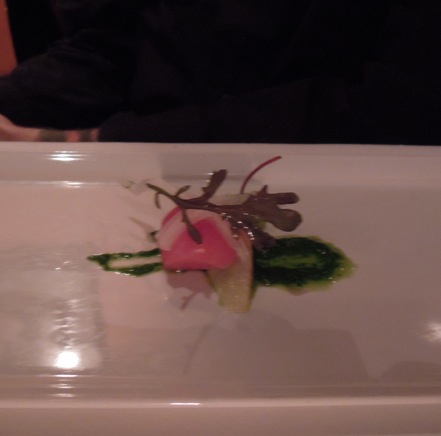 Our amuse-bouche was a pickled radish over... some other vegetable, with microgreens and a cilantro pesto. 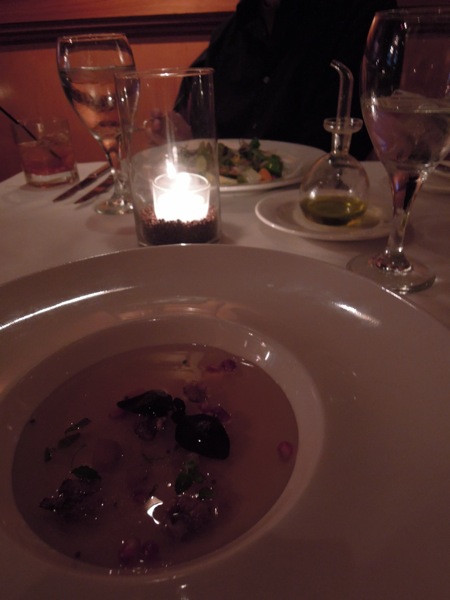 Our first course: a nice salad for Kevin (in the back) with a spicy vinaigrette, and for me, a delicious sweet chilled pear consomme, with pomegranate seeds, walnuts, saffron, and edible flowers. 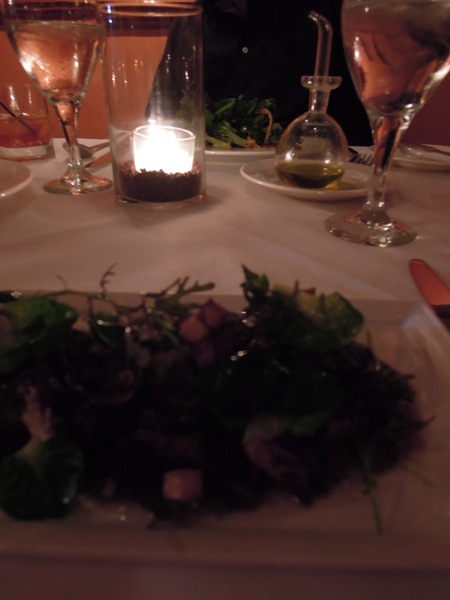 This picture is terrible, but our entrees were AWESOME: Kevin got spicy broccoli with fire roasted peppers, and I had fried brussel sprouts with a pecan pesto. I like brussel sprouts okay, but these were the best brussel sprouts I've ever had, hands down. They were garlicky and fried till they were crispy but not heavy. 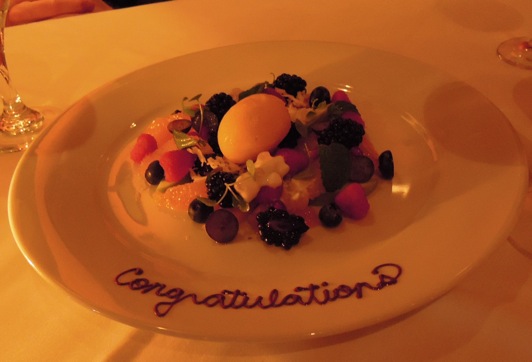 Dessert was a fruit plate, with mango sorbet and coconut milk tapioca. And a chocolate "congratulations!" Awww. 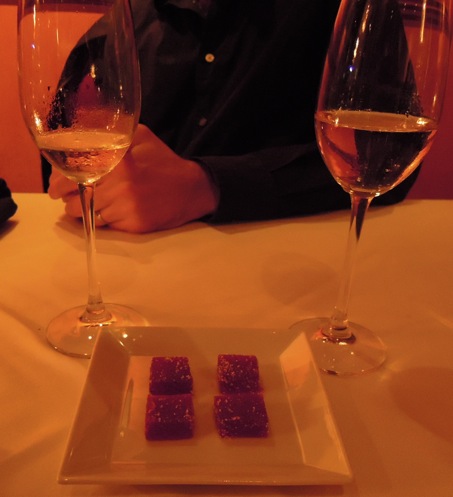 What do you call dessert after dessert? They also gave us complimentary champagne and these little raspberry-and-coconut jelly squares. So nice!

As delicious as our meal at Restaurant August was, you may notice it was almost all vegetables. In a few hours, we were hungry again.

So we went to Bennachin for some snacks: 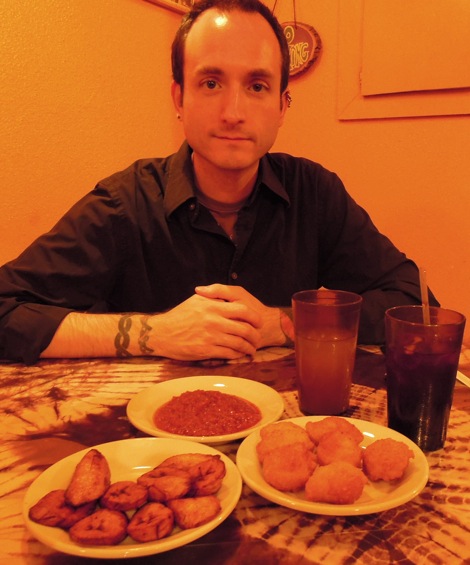 Plantains and black-eyed pea fritters! Nightshade free as long as you ask for the sauce on the side. While we were there for just a snack at that time, we'd gone there earlier in our visit for a really good dinner. Bennachin serves West African food, and all their vegetarian dishes are also vegan. I could get nightshade-free versions of two of the entrees on the menu. Going without spiciness made the food a little plain, but their rolls were so good it didn't matter. Also, they have a really great ginger juice drink, and a hibiscus iced tea. But the fritters were the star for me.

The husband thought it was kind of funny that we didn't eat any "traditional" New Orleans cuisine. As I said above, nothing cajun is nightshade-allergy friendly, so I wasn't looking for any, but those of you without nightshade allergies will be happy to know there are vegan po'boys and gumbos in the city. Another thing I didn't mention is Lola's. We wanted to go, but they aren't open for lunch and we were only out in that area during the day. People on the PPK forum said that their almond/garlic soup, their paella, and their aioli are vegan. We'll have to go next time. And there will be a next time! I had such a blast, I can't wait to go back!

(Even our layover in Miami was pretty good--the airport had a sushi place!) 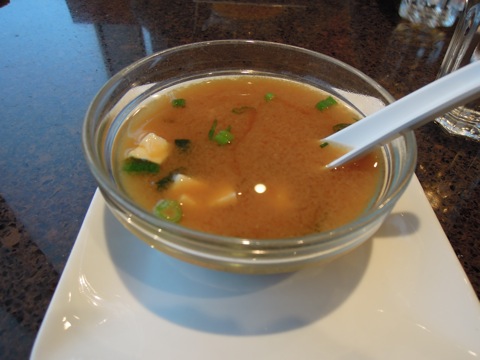