Just as I thought I could get away with more posts here, Ezra outgrew the sleepy newborn stage and went right into teething, which is why there hasn't been much going on around here. But I've been cooking! I felt stuck in a "throw together anything I can" rut for a while this spring, so I started checking out some cookbooks from our local library.

The Great Vegan Protein Book was a nice discovery. I've made three recipes from there and bookmarked a few more.

The Tempeh Noodle Soup was delicious, and (in a good way) tasted like something you'd buy in a can. I didn't get any pictures but it didn't look as good as it tasted anyway. I have a weird thing about soup where I DO NOT like soup as leftovers, but this was a rare exception: it tasted even better the next day. 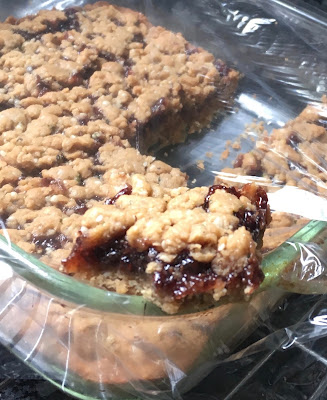 The Sesame Berry Bars were my favorite find and are definitely something I'd make again. They don't actually pack a ton of protein per serving but are full of great ingredients: hemp seeds, whole wheat flour, maple syrup instead of sugar, chia seeds, and any jam you'd like (so you can go for an all-fruit one). They also look and taste deceptively less healthy than they are. 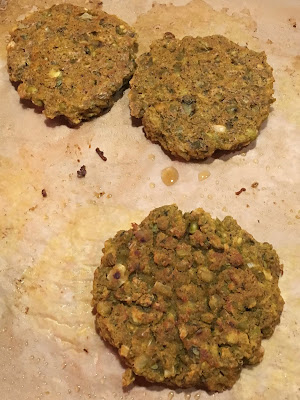 Finally, the Split Pea Patties, while not particularly photogenic, were a nice new way to use split peas. Seasoned with Indian spices, they came together easily and held together very well. I had worried my batter was too liquidy, but no, they turned out fine!

Each recipe in the book tells you how much protein per serving you're getting, which seems useful. If you can't eat nightshades, like me, many of the entree recipes are out: they frequently call for sundried tomatoes or entire cans of tomatoes, which are too much to replace. Because of this, I got it from the library rather than bought it, but the recipes I tried were great. I still want to try the Almond Butter Biscuits and a couple other recipes from this book.

And because I can't stop myself, here is a picture of my baby "eating" (he's 8 months old so he mostly just tastes and then smooshes his food) tofu, spinach, and sautéed fennel and onions: 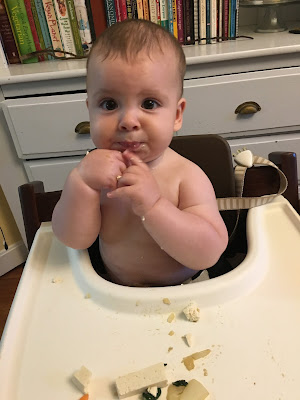