Today is a happy day for me, and I wanted to write a post that would make other people happy. SO I FILLED IT WITH CUPCAKES.

Basically I have turned into "the cupcake girl" amongst my friends. I don't know how it happened, but I started bringing cupcakes to almost every social gathering I attended. Now I can't stop! These are all from Vegan Cupcakes Take over the World. 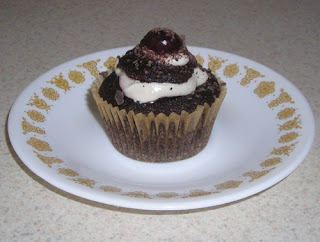 Black Forest Cupcakes (which are a variation on the Chocolate Cherry cupcakes). I ended up using the leftover kirsch to make Kirsch Cupcakes for a different party, which were vanilla cupcakes with a Tbsp of Kirsch in the patter, then decorated with the leftover cherry sauce from these, and drizzled with a kirsch-and-sugar glaze. They went over well and I took no pictures. Anyway they weren't quite as pretty as these. 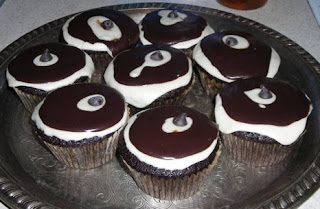 Chocolate Mint Cupcakes. Something about these reminds me of tuxedos and that makes me happy. 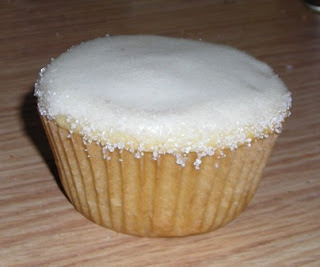 Mucho Margarita Cupcakes! I don't believe in food coloring, so I was worried they wouldn't have enough pizzazz, but they were super-cute and delicious nonetheless. 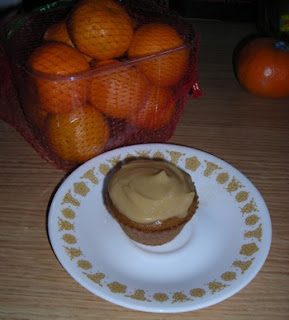 Earl Grey Cupcakes! A variation on the Chai Latte Cupcakes, these involved Earl Grey tea and a lot of citrusy things.

Finally, a recipe for you. The reason this is such a happy day for me is it's my 1-year anniversary with my boyfriend, so I thought the little heart-shaped pie below would be appropriate. Not only is it cute, but good lord. Even when I screw up the crust so it's ugly (but heart-shaped!) and maybe a little overdone, this blueberry pie recipe, one my great-grandmother used to make, might be the greatest pie ever. And I do not make such claims about pie lightly. 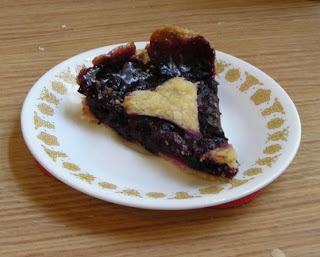 Note: I'm not going to give you a recipe for pie crust, because 1.) everyone has their own favorite, 2.) I have trouble making pie crusts, so I am the last person who should instruct you on how to make one. This pie is best with a top and bottom crust. I ran out of crust for mine: I ended up with only enough for a bottom, and then salvaged some scraps to make decorations for the top.

Prepare your pie crust however you like to prepare it, put the bottom crust in the pie plate.

Wash the blueberries thoroughly and put them in a large bowl. Sprinkle the sugar, flour, and salt over them, then mix until all the berries are coated. Pour over the lemon juice and mix again.

Pour the berry mixture into the pie crust and smooth the surface. Divide the margarine into 6-8 pieces and "dot" the berry mixture with them, about 2 inches between each (this is not a science, though, so no worries). Cover with your top crust (or cheesy decorative crust bits, like mine) and HERE is the catch: Bake at 450 for 10 minutes, then turn the oven DOWN to 350 and bake for another 30 minutes.

Let the pie cool a while before you serve it, but if at all possible, serve it warm, because then it is basically love on a plate. Even if it's not heart shaped.

Great with soy ice cream, but sometimes I just put it in a bowl and pour soymilk over top instead and that is also delicious.
Posted by Sarah P at 5:53 PM 6 comments:

50% paella and 50% risotto, this french-themed rice dish is 100% delicious. This recipe is very easy to adapt depending on what ingredients you have on hand; the only thing you shouldn't replace if you can help it are the herbes de provence. You can use a variety of vegetables and can omit anything you don't have. I use (and recommend) pre-cooked brown sticky or sweet rice, but you can use white sticky rice OR arborio rice. Variations follow the recipe. 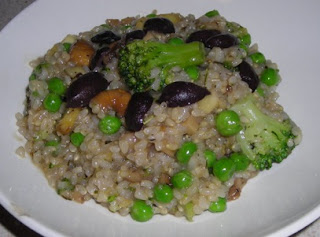 Riz Provencal
Serves 2 as a light meal or as a very generous side dish.

In a medium-to-large skillet, heat 1 Tbsp olive oil over medium heat. Add parsnips, saute 5 minutes, until just starting to be tender and/or browning. Add broccoli, saute 5 more minutes, then add the peas, salt, pepper, and figs. Saute 2-3 minutes, just enough so that everything is mixed and starting to warm up. Add the rice, water, herbes de provence, and the remaining Tbsp of oil; stir frequently until almost all of the water is absorbed; 5-10 minutes, depending on your definition of "medium heat." Top with Olives, and/or some toasted nuts.

Variations:
You can add about 1 cup almost any chopped vegetables to the existing recipe or use them to replace something you don't want. Add them when you add the broccoli (except for harder vegetables like beets or carrots; add them with or instead of the parsnips) Some recommendations that keep with the provencal theme: mushrooms, 1-inch chunks of asparagus, carrots, tomatoes or peppers (if you can eat them), 3-4 chopped chestnuts.
Posted by Sarah P at 10:26 PM No comments: