I tried to get a "food in books" post up and running for you for this month, but it looks like we'll just have to double up next month, because I haven't had time. BUT sneak preview: I'll be cooking from Hardy's The Mayor of Casterbridge, and if you've read the book I bet you can guess what I'll be making. If you haven't, you're in for a (mushy) treat.

This entry is devoted to yellow food that isn't usually yellow. Namely, the Golden Beet. It may just be that I like yellow better than pink, but I personally think that golden beets taste better than their red counterparts--a little milder, so the flavor really stands out. You may remember that I used them in the Wild Rice Salad with Oranges and Roasted Beets in my last entry.

I really love them roasted, especially on salads: 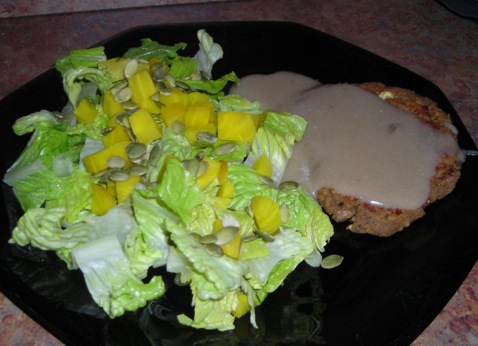 Chopped small on a side salad (chickpea cutlet in the back! whoo!). 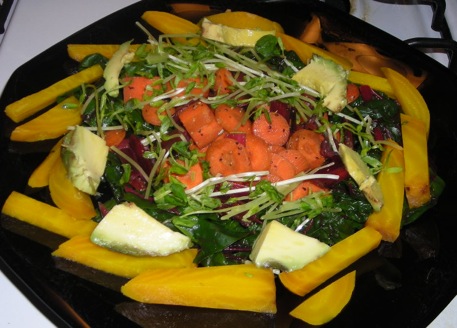 Making a nice beety halo around a wilted greens salad.

And my faaaavorite way to eat them: as raw ravioli with nut cheese! 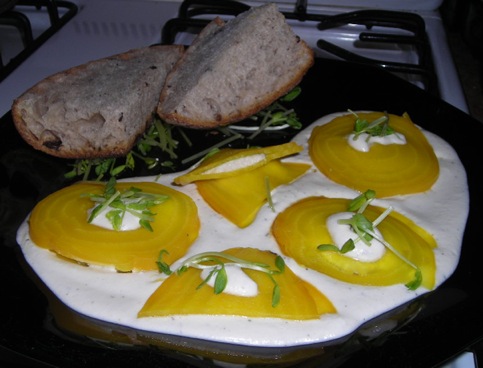 Confession: in this picture, the beets had been roasted. But I've made this dish twice, and I swear the first time they were raw! And having bread on the side made the meal not raw anyway. The raviolis are filled with a thick almond/cashew cheese, which is watered down a little and given italian herbs to make the cream sauce. Yum!

Finally, while these aren't golden beets, they're a golden version of something else that's usually gold: carrots. 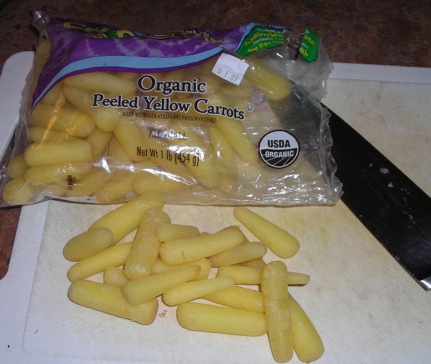 Have you ever tried yellow carrots? They taste exactly the same, but make me feel like I'm eating a different vegetable. I imagine eating purple carrots would be the same...
Posted by Sarah P at 11:49 PM No comments: 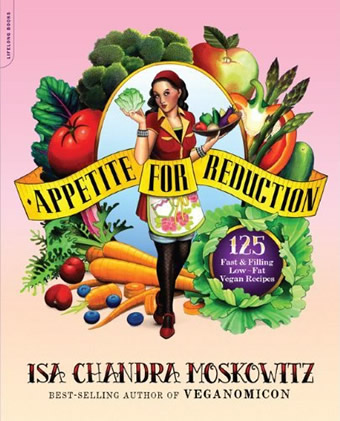 At first, I was hesitant to buy Isa Moskowitz's Appetite for Reduction. I love all of her other cookbooks, but I figured a weight-loss-oriented cookbook was not going to be my thing. But then I started seeing recipes on other people's blogs, and my brother tried and loved the OMG Oven Baked Onion Rings, so finally I was won over. (Plus my wonderful mother gave it to me.) Since getting the cookbook, I've only made a handful of recipes from it, but I have really enjoyed all of them. I won't bother to link to the recipes, as they are all readily available online (including through the Amazon product page, where after reading the recipes I recommend you buy the book).

I love onion rings but don't deep fry at home, so I was excited to try the OMG Oven Baked Onion Rings (recipe here). And they are AWESOME. I use large bread crumbs, though, so I ran out... then again, I think I took more rings per onion than Isa's recipe called for. I didn't take a picture--we ate them pretty quickly. 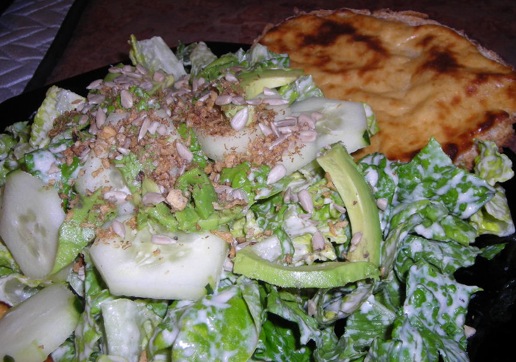 The Caesar Chavez Dressing (pictured with bread with toasted homemade "cheese" on top) was delicious. I never had "real" Caesar salad before going vegan, but I always get excited when restaurants offer vegan versions, and I'm on a quest for the perfect homemade vegan Caesar salad. I really liked this one.

While I'm hunting down the best homemade vegan Caesar dressing, the boyfriend is on an eternal quest for the perfect homemade goddess dressing. So I made him the Green Goddess Garlic Dressing, below. 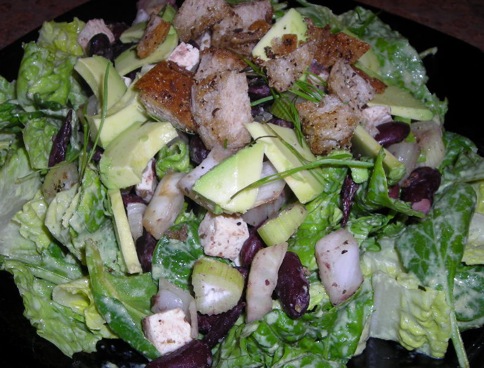 Topped with some beans, veggies, and homemade croutons to round out our salad as a meal. The dressing was delicious, but didn't have quite the distinctive bitterness the boyfriend and I associate with goddess dressings. I'd make it again, though.

I also really liked the Wild Rice Salad with Oranges and Roasted Beets.. 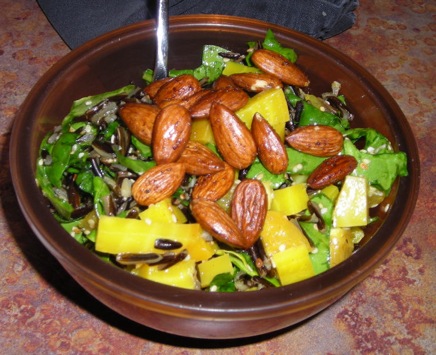 I used golden beets, and spinach instead of red-leaf lettuce, so it's not the right colors, but was just the right taste. The orange-sesame vinaigrette is fantastic.

Appetite for Reduction is a lot more than salads. In addition to the onion rings, I've made a couple of the heartier entrees, including the Chickpea Piccata. Busy Vegan Mama made it a while ago, and her picture of it made it so appetizing I had to try--I've since made it twice. It is a lot more delicious than the sum of its parts, if that makes sense. It is simple to make but tastes complex.

I am saving the best for last: the Baked Falafel was AWESOME. 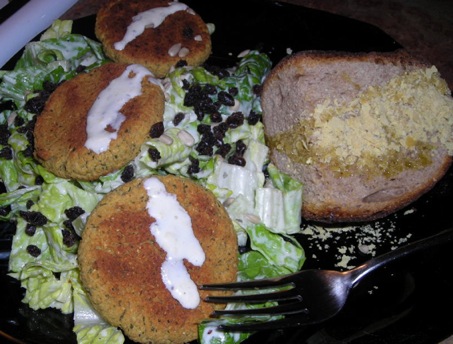 I'm a big fan of falafel, but again, not of deep frying at home. Also, falafel frequently has nightshades. (This recipes does, too, but easily replaced: it calls for 1/2 tsp of paprika and 2 tsps hot sauce. Substituting black pepper for the paprika did the trick, and 1 tsp of vinegar to replace the hot sauce--the black pepper added some heat, so the vinegar was just to add pungency.) Making it at home, without frying, was a really appealing idea--and the taste makes it even more amazing. These are delicious, and I know I will make them many times again. Served above with a ranch-type salad, and bread with some nutritional yeast and oil. (Not traditional, I know, but we wanted something carb-y and we didn't have pitas.)

I'm excited to try more from this book. Have you tried anything from Appetite for Reduction? Any favorites, or recipes I should avoid?
Posted by Sarah P at 8:27 AM 5 comments:

Socca! or, an ode to the chickpea

...or, here's more proof that I love anything involving chickpeas.

Chickpeas are my favorite food. Ever. Even above chocolate. If I were stuck on a desert island and could only choose one food to bring with me for the rest of my days, I would pick chickpeas. They're so delicious and versatile, whole, mashed for chickpea cutlets or chickpea salad, ground for hummus, or powdered to make chickpea flour. They're full of protein, fiber, folate, some other nutrients and did I mention deliciousness? Anyway, long story short, I recently discovered a simple chickpea recipe that I had to share.

Chickpea flour, water, oil, salt, heat. This combination of ingredients goes by different names across different cultures: socca if you're French, farinata if you're Italian, chilla if you're Indian. Whatever you call it, it is delicious. Socca (I'm half French [Canadian], so that's what we'll call it here) is a sort of chickpea flatbread, flaky and delicious, great hot or cold, as a side dish or a snack. 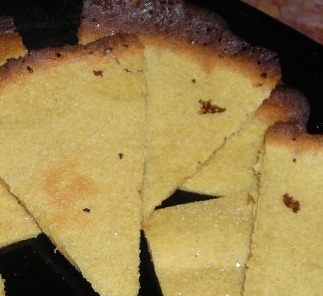 I first read about socca on the kitchn website, which isn't a recipe but a review of a recipe from David Lebowitz's blog. I later discovered that Mark Bittman has a simpler version in How to Cook Everything Vegetarian and on his Minimalist blog. Everyone seems to have their own variations, but the end result is the same: thin, flaky, salty flatbread with only the slightest of chickpea tastes.

I have three notes about making socca: 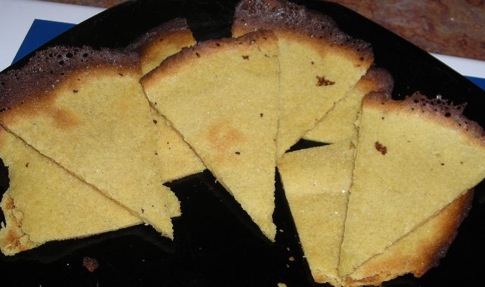 Socca
This recipe makes makes 3-4 large socca pancakes, which is enough to serve about 3 people as side dish or snack (or 2 if someone's obsessed with chickpeas like me), but they're so tasty you may want to double it.

In a mixing bowl, whisk together the chickpea flour, water, 2 Tbsp of the olive oil, salt, and cumin/herbs (if using) until smooth. Cover and let sit (see note #1 above for how long).

Preheat the oven to 450, and put a 9-inch cast iron skillet in while it preheats. If you're using onions, mix them into the batter now. Once the oven is ready, take out the cast iron pan, add the remaining 1 Tbsp of oil and swish it around till the bottom of the pan is well-coated. Pour enough of the batter to coat the bottom of the pan (about half a cup, maybe a little more?), then return the whole thing to the oven. Bake for 15-20 minutes, until the edges are dark brown and the center is starting to brown a little in spots. Remove from oven, then slide it out onto a cutting board.

Add a little oil to the pan, swirl it around, then repeat with the rest of the batter. Cut the socca into chunks (little squares are traditional), sprinkle with salt, and eat with your fingers. They are so delicious!
Posted by Sarah P at 12:30 AM No comments:

Tired of the same old sides? Out of ideas for cabbage beyond cole slaw and sauerkraut? I have two words for you: Roasted. Cabbage. 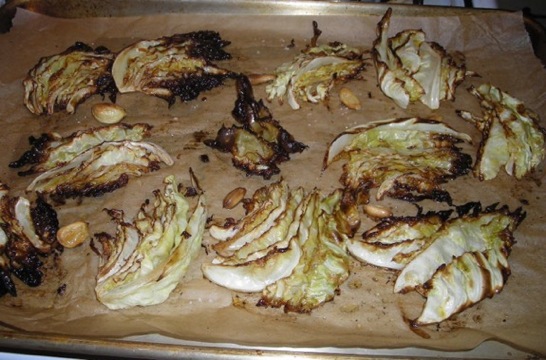 I know it sounds crazy, but hear me out. Have you noticed that almost every vegetable becomes even more delicious when you roast it? Cabbage is no exception! It gets smooth, almost buttery, and flavorful--similar in taste to well-roasted cauliflower, but with a better texture.

I got the idea from an old Kitchn post, but that recipe calls for bacon, and to blacken the cabbage. I prefer my roasted vegetables meat-free and lower on carbon. So I made a few adjustments, including garlic instead of bacon and a shorter cooking time.

Preheat the oven to 450. Line a baking sheet with parchment paper. Core the cabbage, and cut it into wedges--at least 8 wedges, more if it's a very large cabbage. (Mine was rather small, as you can see in the picture below.)

Lay the cabbage wedges flat on the baking sheet. Put the garlic between the wedges, and drizzle everything generously with olive oil. Sprinkle a bit of salt on top of each wedge.
Bake for 15 minutes, then remove from the oven and flip each wedge. I used a fork to do it. The edges will be a little brown by now; the idea is to get them close to burnt but not burnt! SO put them back in the oven for 5 minutes. Everything should be brown-edged and fragrant; if they look a little pale, give it another 5 minutes.

Quick, easy, delicious, and unexpected! This is an awesome side dish for almost anything. Annnnd such a quick and easy side dish means you can spend more time outside enjoying the spring weather, like I've been doing!* *-This is why I only got around to updating 3 times in April. Oops.