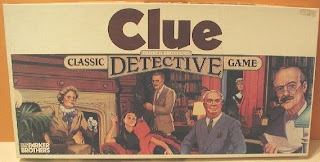 I love Clue. I used to play it (the version pictured above) for hours when I was a kid; it was my favorite board game. When I first saw the movie, I was probably 6 or 7 and it quickly became one of my favorites (also high on the list: Splash and The Little Mermaid. We can therefore deduce that in first grade, my main interests were McCarthyism and Mermaids*). 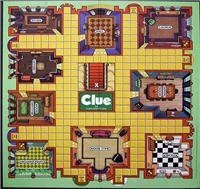 I always had to be Professor Plum. We can analyze my attraction to this character in three ways: 1.) Aesthetic - the purple game piece was the prettiest.** 2.) Romantic - Okay, so he's not attractive, but who cares--I prefer "intelligent" over "good-looking" (case in point: at age 5 I wanted to marry Donatello, the smartest of the teenage mutant ninja turtles). [Who ALSO wore purple!] 3.) A sort of far-seeing Narcissism (my career goal? PROFESSOR). 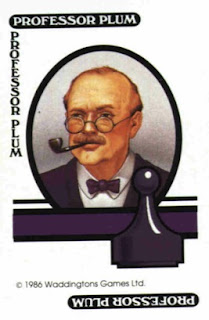 And in the movie, who should play Professor Plum but Christopher Lloyd, one of my favorite actors (as a child I loved him in Taxi and in Back to the Future because he was so crazy)!

Okay, so I'm getting to the food part. A friend invited me and my boyfriend over to watch Clue, and I wanted to bring a dessert. What, then, could I make to fit a Clue theme? (I'd been thinking Cupcakes with little marzipan Clue weapons, but alas, I loaned out my [roommate's] muffin tin, so no cupcakes.)

And then it hit me. 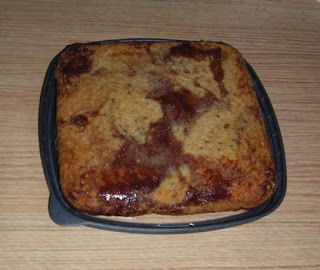 This is a dense little cake. If you want to make it a little healthier, you can replace up to half the flour with whole wheat pastry, and half the oil with soy yogurt (both work fine) but I wouldn't go much further than half.

Combine the flour, baking powder, salt and cardamom in a small bowl.

In a large bowl, use a mixer to beat the margarine until soft and (I hate this word) creamy (about 2 minutes). If you don't have a mixer, use a fork for a long time. Add the sugar and beat for another 2 minutes. Add the flax meal and water and beat for 2 MORE minutes. Add the oil, orange zest, and vanilla, and beat until they are all combined. Now put away the mixer, and STIR in the dry ingredients, until just combined. It'll be a thick batter. Finally, pour the plum preserves into the batter, stirring it ONLY enough to marble it in.

Pour the purply goodness into the baking pan and bake for 40 minutes, until the top is golden. I turned mine upside-down and drizzled a light glaze over it (recipe follows). 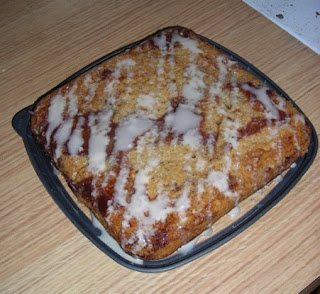 Simple Glaze
(I actually halved this for my plum cake, but that's because I'm not a big fan of icings)
1 C powdered sugar
1 Tbsp margarine
1/2 tsp vanilla
2-3 Tbsp soymilk (vanilla soymilk is especially awesome, or soy nog if you have it--yum)

With your mixer, or a fork if the mixer is covered with plum cake batter, blend the sugar and margarine until there are no chunks of margarine left. Add the vanilla, then add the soymilk one tablespoon at a time - if it seems dry after 2, add the third, and if it's still a bit dry, try another tsp or so. But if it seems runny enough after 2, by all means, stop. Icing can be so finicky. Drizzle over your cake or any other dessert.

Note: I couldn't find fresh plums anywhere, so I used plum preserves. If you actually have plums, you can still make this recipe, but increase the amount of brown sugar to 3/4 cup and either: a.) chop 6 plums into wedges and fold them into the batter in place of the preserves, or b.) cut them into halves and press them into the top of the batter after pouring it into the pan but before baking [google search "dimply plum cake" and you will see what I mean].

*-This gives me a fantastic idea for a movie. Must get to work on a screenplay...
**-Though I was occasionally Mrs. Peacock because the blue was almost as pretty, and SOMETIMES Miss Scarlet because she was the babe of the board game.
Posted by Sarah P at 10:41 PM 8 comments: