You may be under the impression that I like breakfast food as much as I like cupcakes*. THIS IS TRUE. But I am not a morning person and getting to work on time is daunting even on the best of mornings, so my weekday breakfast is almost always the same thing: flax/raisin bran cereal with soy yogurt and soymilk, and a banana. I will never take a picture of this breakfast because it is appallingly beige by the time I'm through mushing it all together. WeekdayMorning Vegetalion cannot be bothered with making her food look good. But even WeekdayMorning Vegetalion gets bored with the same thing every day. So sometimes I forgo the banana and try other fruit: 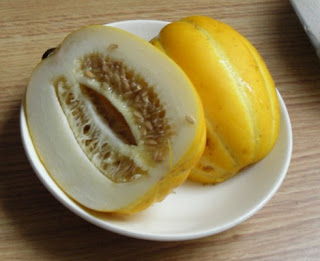 Sometimes, to keep with my mushy, beige weekday morning theme, I make oatmeal instead of cereal. You have seen my Coconut Cashew Kiwi oatmeal. 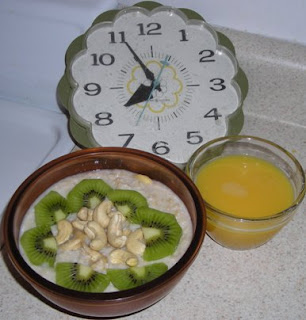 (Look at the time! almost late for work, and yet taking pictures for this blog? that is true devotion, dear readers. I like "dear readers" because it is nearly a palindrome.)

And once in a GREAT while, I branch out and try other cereals or new foods. Like Chia Goodness, a chia seed "cereal" that has buckwheat groats and hemp seeds for extra protein. 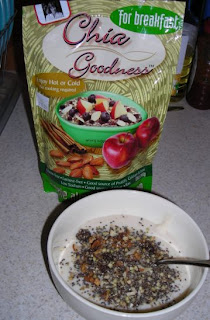 Have you all noticed the recent popularity of chia seeds? They are apparently very good for you, but they lodge themselves in one's teeth and also get sorta congealed like flax seeds. Plus all I can think, while I'm eating them, is of the Chia Pet commercial jingle. "Ch-ch-ch-chia!" It is an odd way to start off one's day.
Here's a close-up: 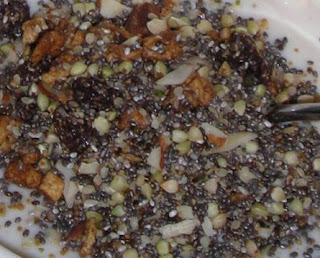 But as you've seen in other entries, I do actually make breakfast food that isn't mushy or weird. WeekEND Morning Vegetalion loves exciting breakfast foods. And my boyfriend is even more obsessed with brunch food. So this last picture is not something I made, but a culinary experiment he made for me.

I couldn't decide whether I wanted french toast or waffles for brunch. He suggested both. We can't have both, I said. He suggested we combine them and make some sort of hybrid French Toast Waffle thing.

It will never work, I said, and left the kitchen to call my mother. 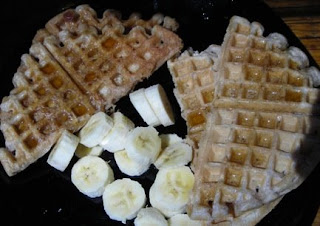 
* - Speaking of which, there have been blessed few cupcakes on this blog recently, and yet a great many cupcakes in my kitchen and/or belly. I will remedy this soon.
Posted by Sarah P at 12:19 AM 3 comments:

I had a crepe failure a couple weekends ago. I thought I'd just whip some up for brunch, but my trusty crepe recipe (the really simple one from the voluptuous vegan) failed me. I think it was just too thick. Anyway the crepes were thick and clung to the pan like two-year-olds with separation anxiety. 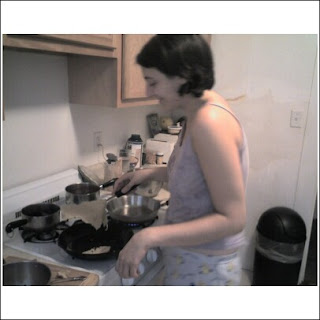 Ultimately I would've just given up and stormed off to pout in a corner, hungry, had my boyfriend not recommended adding some more flour and some baking powder and calling them pancakes. He fixed brunch!

Bu I still needed reminders of times I didn't fail at crepes! Fortunately I had these pictures saved from a little while ago to fix my mood... 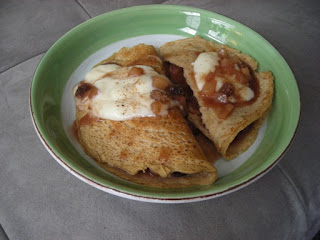 Crepes with a sweet red-wine-and-pear filling, made just like my dried fruit compote, only with canned pears and raisins. Topped with soy yogurt! 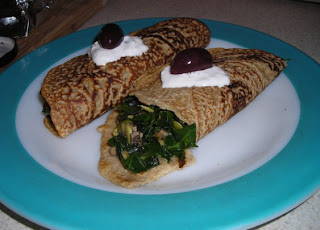 And sticking with my "fixing failures" theme: a recipe! I tried veganizing and de-alcoholing (since we didn't have any) a Chocolate Kahlua Pie recipe. The recipe called for straight milk, not cream, so I thought I'd be okay, but the soymilk didn't thicken enough and it ended up being chocolate soup in a pie crust instead of a thick pudding. I'd even added used some of my vast stores of mimiccreme in place of some of the soymilk! but no. It was not even goopy, just liquid.. After refrigerating it a while and realizing it would not resemble anything cream-pie-esque, I stuck the whole thing in the freezer. And later that night, I discovered it was not a failure!

1 pie crust (graham cracker's good, especially if your mom has a natural food store and gives you 3 because the are past date)

In a saucepan, combine cocoa, sugar, cornstarch, salt. Stir in milk over medium heat. (If using agave, add it here instead of in the beginning). Continue to stir until the mixture boils. Reduce heat down to low, add coffee. Stir 1 minute more. Add margarine and extract(s), then pour into the pie crust. Freeze overnight, or 4-6 hours.

When you serve it, let each piece sit for a minute or two after removing it from the freezer, so it's not too hard. It goes great with berries, especially the berry sauce you had originally made for crepes that failed miserably (see above).
Posted by Sarah P at 1:34 AM 6 comments: