Two summers ago I tried my hand at a flower garden. Having successfully not killed any windowsill plants in my life, I figured I was ready to move on to the great outdoors. I grew cosmos, which are hard NOT to grow, marigolds, which are among my favorite flowers, and I grew amaranth.

Amaranth is an annual that is easy to grow and produces pretty red flowers. But amaranth is ALSO a grain! Which is, flowers aside, what this entry is about. I did not eat my amaranth, but I have a soft spot for the stuff ever since. 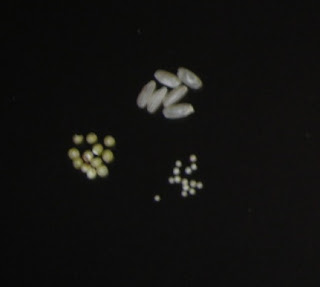 Amaranth is a very tiny grain: here it is, on the bottom right, compared to millet and brown rice. It is very high in iron and is a good source of calcium, magnesium and zinc. And as it is a whole grain, it's also high in fiber. And delicious! But while amaranth sometimes shows up in the occasional bread, muffin or porridge, it mostly a forgotten grain. 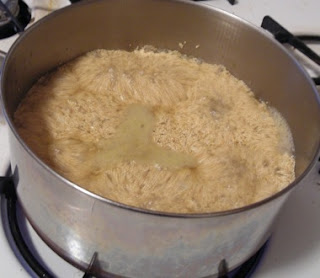 Honestly, usually I just boil then simmer it like rice and eat it plain as a side dish. But it's got a smooth, nutty taste and is just so adorable in the pan that I think it could go far.

So to what sort of recipe does such a tiny specimen lend itself? I asked myself. Having been on a cornmeal kick recently, my first thought was GRITS. (I love grits. Which is weird because I am a new englander at home and at heart) And I felt very original until I googled it and discovered that recipes for amaranth grits are all over the internet. But after looking at a few, I have decided everyone's over-complicating things. So I will not be deterred by how many other people thought of this first.

In a medium-sized pan, saute the onion in oil over medium-low heat until slightly translucent. Add water, raise heat to high. Once the water boils, stir in amaranth, turn heat to low and cover. Simmer for 30 minutes, stirring occasionally, until the liquid is absorbed. The mixture will be (for lack of a less disgusting word) porridgy.

Serve in a side bowl, or diner-style: plopped right on the plate so it all runs into everything else. Top with a pat of (fake) butter. I had mine with spinach, corn and olives, but this would be great with breakfasty-type foods (pancakes, waffles, fake sausage/bacon) or with a more traditional dinner-type meal (imagine it as a replacement for mashed potatoes) 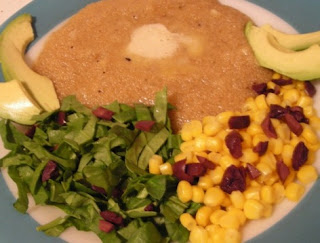 oh-so-runny and unattractive, but good lord. A delicious, healthy spin on comfort food.

And because I can't help but post adorable food moments, I was chopping up swiss chard stems to toss into a stir-fry the other night, and the pieces of one particular stem caught my eye: 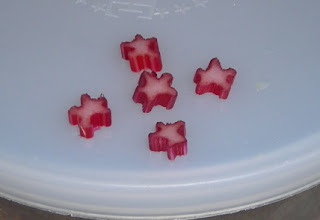 CHARD STARS! They were so cute I almost didn't want to eat them.

alternatively titled, someone else I love to hate.

As some of you may remember, I dislike Rachael Ray and everything she stands for (ie, dunkin donuts). AND YET she has some great recipes that I can't resist making/veganizing.

Rachael Ray has been replaced in my life, with Heidi Swanson of 101 Cookbooks. For those of you too lazy to click on the link, 101 Cookbooks is a vegetarian food blog whose conceit is that the creator, Heidi Swanson, has 101 cookbooks and realized one day she had to start cooking from them before she could allow herself to accumulate more. Heidi Swanson posts gorgeous pictures with cute little stories and fairly healthy recipes.

Other than her loose definition of being a vegetarian (oh, you had soup made from chicken but wouldn't eat beef cheeks? that's okay then), I have no reason to hate Heidi Swanson. And yet every time gmail links to one of her recipes above my inbox, I groan. Stupid Heidi Swanson and her soothing white and beige blog and her so-pretty-they're-practically-pornographic pictures of food. I refused to try any of her recipes for months.

But then! I got home late one night to find a note from my roommate: she had made a tofu scramble, I could help myself if I was hungry. So I did. It was THE GREATEST TOFU SCRAMBLE I HAVE EVER HAD. I'm not exaggerating. The next day I told my roommate how amazing it had been... and she told me where she got the recipe.

I still irrationally dislike Heidi Swanson. But yeah, okay, now I sometimes check out her blog. And dangit, I pretty much always like the recipes. 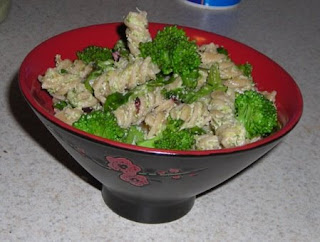 For the first time in a while, I too, have been turning to my cookbooks. Here are some of the results: 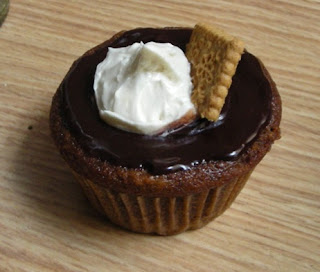 Smores Cupcakes from Vegan Cupcakes Take Over the World 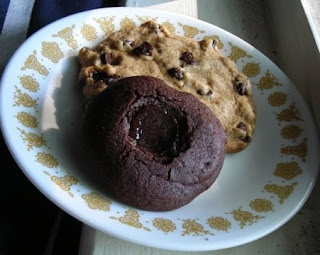 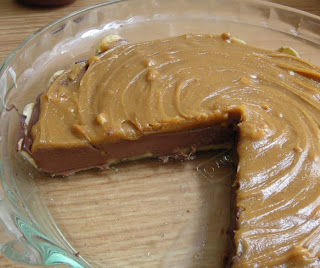 Chocolate Peanut Butter Pie, from pamela's blog - but slightly healthier, I swear! I halfed the amount of chocolate chips and sugar, and instead put in a little extra tofu and some cocoa powder, and if you look closely, you'll see I used sliced bananas instead of a cookie crust: 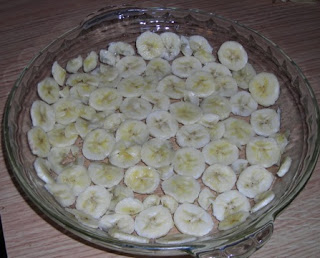 And finally, Paradise Casserole from the Candle Cafe cookbook. 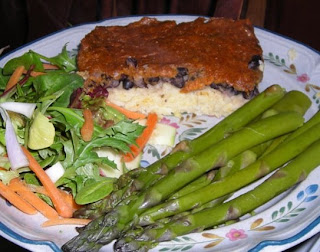 When I had this at the Candle Cafe, there were waaaaay more sweet potatoes on top. The recipe called for 4. Next time, I say at least 6! I made it for my mother when I was back in upstate NY. ALSO in upstate NY, I got to meet and enjoy delicious vegan milkshakes with bazu of where's the revolution?!
Posted by Sarah P at 10:55 PM 9 comments:

I visited the homestead in upstate NY for a week (and got to meet the lovely bazu in the process!), and two exciting things came of it:

1.) The chicks who were all little and skittish and fit in the palm of my hand the last time I visited my family (april) are now pullets and no longer fit comfortably in the stocktank that has previously been their home. Sooo we introduced them to the big green world! And introduced them to my family's old, street-smart chickens. They don't really get along yet, though. 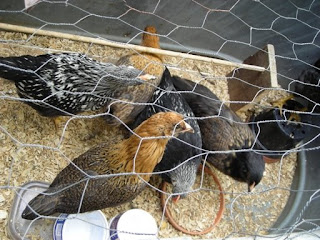 Chickens in the stocktank. You are about to be free, little chickens! 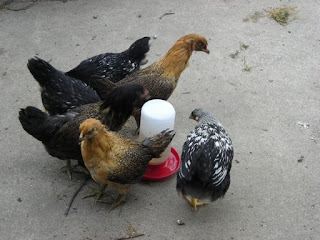 Turns out they did not like being free. They clung together and were not keen on the idea of leaving our driveway, as grass is scary. But after we moved their feed out onto the grass, they acclimated pretty quickly. 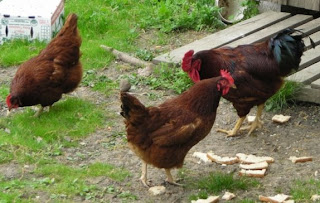 The old chickens also clung together. They were a little weirded out by the new chickens and clucked offendedly.


2.) My mother sent me back to boston with 7 - I kid you not - 7 quarts of unsweetened mimiccreme (she offered me 9 - ! - of the sweetened but I declined) that just went past date at her store. So expect many ideas of what to do with vegan cream. 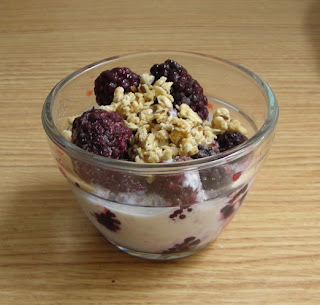