...such an awesome combination.

I love pasta. I think when most people think of pasta, they immediately think of some type of marinara sauce. My nightshade allergies make this an unfortunate impossibility, but they don't stop me from loving pasta. I try not to eat a lot of it, because even though I go solely with organic, whole wheat pastas, it still tends to lead to me eating a lot of carbs that I might not work off. But I'd say we still have pasta at least once a week.

Since I can't have tomatoes, I rely on white sauces, alfredo sauces, or just--my favorite--olive oil, garlic, and herbs. I saute up some veggies (and often beans) in lots of oil, then add cooked pasta--bam! delicious pasta. My favorite veggies to add are onions, garlic, greens, and this time of year, winter squashes.

I love squash almost as much as I love pasta. Acorn, carnival, butternut, dumpling, delicata... you name it, I love it.

I usually don't peel squash before cooking, because it's awful to peel, and most squash skins are edible. (Well, they're all edible, it's just that Acorn squash skin is sometimes a little tough.) I just cut it in half, trim off the stem, then roast it at 475 for 20-30 mins, until I can pierce it with a fork. 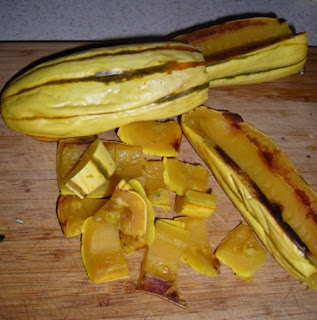 This is delicata squash, one of the sweetest squashes, roasted and ready to be added to: 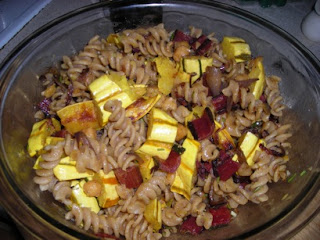 PASTA! Fusilli (that is, the spirally kind) is my favorite. There are also chard stems and onions and LOTS OF GARLIC in here. Probably rosemary, too (I don't remember), since rosemary goes really well with squash.

There is one squash I don't like as much as the others though: pumpkins. Don't be mad. Everyone else this time of the year goes crazy about pumpkins and pumpkin products. They're okay, but there are so many delicious squashes out there, I just think it's silly to go bananas over this one in particular, which isn't even as tasty as delicata squash!

I do love them for carving, though. 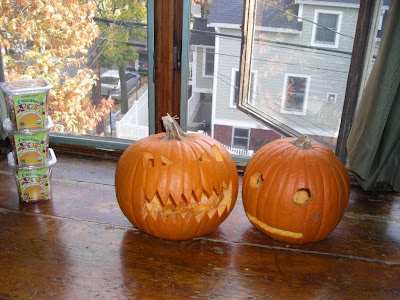 These were our pumpkins this year. Mine is the scary one, the boyfriend's is the one on the right. I wish I'd taken a picture of these lit up; they looked great. To the left, you can also see the organic Trader Joe's lollipops we gave out for Halloween.

Okay, more than halfway through VeganMofo. Great job to everyone who's writing for it, and thanks to all of you who are reading it!

Oh! ATTENTION BOSTON-AREA READERS: Melisser, of Urban Housewife fame, is talking about and signing her new book, the Vegan Girl's Guide to Life, at Peace o' Pie tomorrow evening (11/17) at 7pm. In addition to being awesome, Melisser is a fellow Vegan Mofo-er. You should totally be there!
Posted by Sarah P at 9:51 AM

That pasta looks wonderful. I haven't made pasta in a long time think it's time I do.... hmmm maybe dinner tonight.

My favorite pasta "sauce" is olive oil/garlic too :).

Just a week ago, thinking of squash with pasta would have seem really strange to me, but last week-end I went in Naples and discover squash cannelonni... sooo good ! And so simple : roasted squash, some mixed and some diced really small. Topped with fresh basil leaves, yum.