A while back, one of the boyfriend's co-workers brought barbeque brisket into work to share with everyone. The boyfriend, feeling a little sorry for himself, texted me to ask if I thought I could make a seitan brisket. I had no idea what brisket was, but I'm always up for a challenge, so I said yes and commenced looking up recipes online.

It turns out brisket is actually a cut of meat (usually beef). It's most commonly associated with Jewish and Southern cuisine. Once I actually realized brisket is just... meat... I was a little unsure I could or wanted to pull off a convincing seitan version, but considering that neither the boyfriend nor I ever had the real thing, and the fact that it would be smothered in barbeque sauce, I figured it couldn't go too wrong, so I gave it a shot.

It turned out really well. 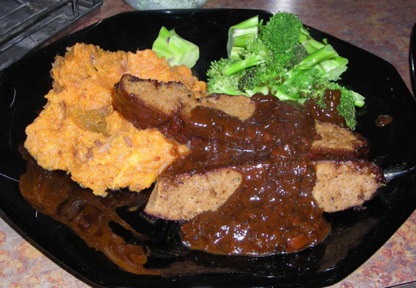 As I said yesterday, my go-to seitan recipe is the Seitan o' Greatness recipe from the PPK. This is a good base for the brisket, but needed quite a few changes, for three reasons: 1.) brisket by itself isn't as flavorful as Seitan o' Greatness, 2.) Brisket isn't shaped like a log, and 3.) Brisket isn't cooked in foil. So! Changes I made:
I lightly greased an 8x8 pan, then put in the seitan brisket. Next I preheated the oven to 375.

The next step is to mix 1 Cup barbeque sauce and 1 Cup water in a small bowl or large measuring cup. I make my own barbeque sauce, but you can also use store-bought. Either way, it should be a little smoky, so if it isn't, add a tsp of liquid smoke. You need to add the water because otherwise the seitan will dry out in the oven. Pour the sauce mixture over the seitan, swishing it around a little to make sure the bottom soaks some up, too.

Bake it, uncovered, until the water evaporates and the barbeque sauce thickens on the brisket, and on the bottom of the pan. This took me somewhere around 40 minutes. I'd recommend checking it at 30 minutes; if there's extra liquid, spoon it over the brisket. If there's not extra liquid, add some. There's a lot of guesswork here because I didn't write down what I was doing, but I will make it again sometime to confirm the cooking time and temperature. But keep an eye on it and you'll be okay. It should look like this when it comes out of the oven: 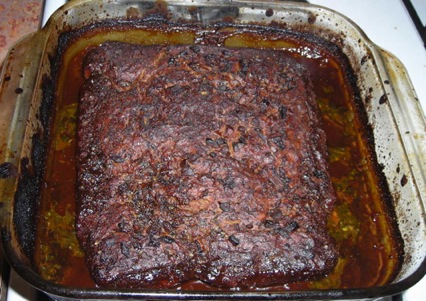 Let it sit for a couple minutes, then transfer the brisket to a cutting board. Slice. 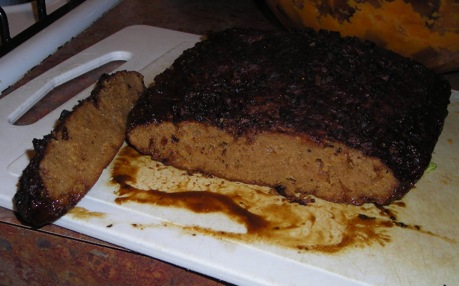 It is up to you whether you want to google "brisket" to see what the meat version looks like, but if you do, you will be as amazed as I was at how close this looks.

Spoon the thickened barbeque sauce that was left in the pan over the slices, and serve with southern-style sides (like greens and mashed sweet potatoes, above; biscuits would be good, too). After if cools, slice it thinly and use on sandwiches. It is ESPECIALLY delicious on sandwiches. 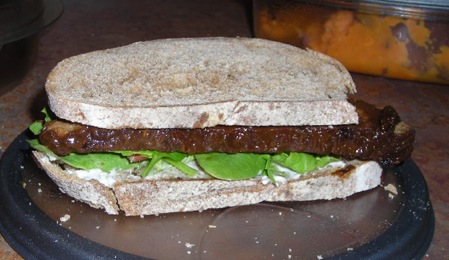 That looks delicious. Did it retain it's moistness? I hate dry seitan.

It stayed really moist! I wanted it tender and not dry; That's why you add the cup (or more) of water to the pan before baking. Also, the BBQ sauce kinda caramelizes on the skin of the seitan, helping keep moisture in.

That looks so good!

Whoa. Whoa. I want a plate of that.