The boyfriend and I are finally back from spending Thanksgiving with my family in upstate NY, but since I haven't had time to upload photos of our delicious almost all-vegan meal, you get the next best thing: a pizza post! 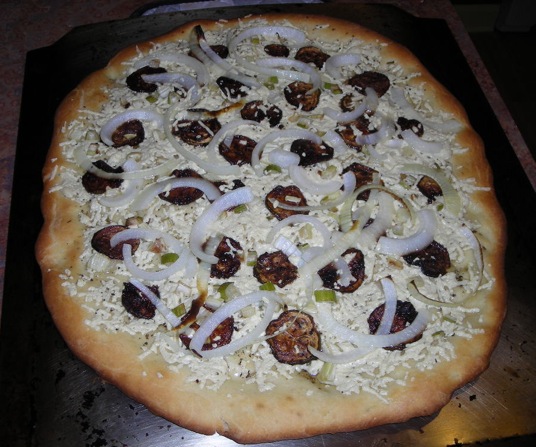 Bread, oil, something cheesy: what is there not to love about pizza? The sad thing for me is that because I can't have tomatoes, it's only white pizza for me--so even ordering from vegan pizza places can be tough or boring. Fortunately, pizza is delicious and easy to make at home; including the dough rising, homemade-from-scratch pizza only takes 2 hours, and an hour or more of that is just waiting for the dough to rise! It's incredibly satisfying to make your own pizza, and a lot cheaper than buying pre-made.

This looks like a lot of steps, but it's very easy. I'm just writing everything out in case you've never made any type of dough before.

Pizza Dough
Makes one large pizza dough. Servings depend on what you serve on the side. This serves 2-3 if you're not eating much else, but can serve 4 if you have side dishes)
1 C warm water
2 1/4 tsp dry active yeast (this is 1 packet if you use those)
2 tsp sugar (or maple syrup or agave) (optional but recommended!)*
2 Tbsp plus 1 tsp olive oil
1 scant tsp salt
2 1/2 C flour (You can sub up to half with whole wheat flour [not ww pastry flour!], but it won't rise as well. I only sub about 1/2 a cup with Whole Wheat flour.)
additional flour for dusting (I'd say a scant 1/4 C for the whole process)

In a medium-sized bowl, combine the yeast with the sugar and about half of the water, stir to dissolve as much as possible. (The water should be warm but nowhere near hot--err on the side of cooler water. Yeast comes to life best in warm environments, but temperatures over 110 F can kill the yeast.) Let this sit for about five minutes.

Meanwhile, use 1 tsp of the olive oil to lightly grease the inside of a medium-large bowl. It's good if the excess oil sinks to the bottom.

Back to the yeast! It should be mostly dissolved. There may be foamy clumps on the surface; that is good! (If there aren't, don't worry.) Add the rest of the water, the salt, and the remaining 2 Tbsp olive oil. Stir, then add the flour, about half a cup at a time if you have the patience. Stir to combine; it will be shaggy and messy. Take your dusting flour and sprinkle a little bit on a clean counter or cutting board. Also dust your hands. Now dump your dough mixture onto the surface, and use your hands to work in all the shaggy bits.

Now you're going to start kneading. Kneading isn't scary or intimidating; as long as you're always doing something to the dough, you really can't go wrong. This dough is a little wet, which means you may need to dust your surface and hands fairly frequently to keep it from sticking to everything. Push the dough around, fold it, twist it, whatever you want--basically you want to be punching it down and handling it until it becomes only a little tacky (not full-on sticky), and is consistent and kinda rubbery in texture. Smooth and shape it into a nice, smooth ball. Put the ball in your pre-oiled bowl, rotating it so that the whole surface has an oily glaze. Keep the bowl in a warm place (near a heater is good, or if you're cooking, near the stove), cover it with plastic or a dishcloth, and let it rise at least an hour.

You can use that hour to prepare your toppings, if you want.

Ideally, your dough will double in size. If you're in a hurry, an hour to an hour and 15 minutes is fine, even if it hasn't completely doubled. If you're not in a hurry, letting the dough rise for a couple hours is nice. Anyway, when it's done rising, preheat the oven to 425. Get out a baking sheet (or if you're fancy, one of those pizza stones; I have no idea how those work, though). Lightly grease that with a touch of olive oil. It's best if you do this with your hands, so your hands are a bit oily still when you go on to the next step. This is the best part: Remove the cover from your dough, and punch it down! It usually makes a satisfying sighing noise. Take the dough out, mash it and stretch it and mash it again a few times with your hands, then put it down on the backing sheet. Spread the dough out into the shape you want (ie, circle, rectangle, triangle, whatever), working it with your fingers to try to ensure that it doesn't get too thin or too thick in some places. (The bigger you make the pizza, the thinner the crust will be.)

Put on your toppings. If you like thin-crust pizza, put it right in the oven. It'll rise a little as it cooks. If you have time and like a breadier pizza crust, you can let the dough sit and rise for another 30-45 minutes, preferably near the oven, before baking. It'll rise more in the oven, too. Bake for 20-25 minutes, until the sides of the crust begin to brown, checking occasionally.

*-Note: Adding sugar to a yeast-water mixture is called "proofing" the yeast. Yeast feeds off on the sugars in flour, which is how it rises. Giving the yeast a little extra sugar earlier on in the process helps it rise more quickly, but some chefs suggest it is only marginally so, which is why I say it's optional.

The pizza pictured above is made with daiya cheese, onions, and my signature zucchini pepperoni. But I don't get daiya very often, so usually I make my own cheesy sauce out of nutritional yeast, herbs, cashews and/or tofu. Here is the same kind of pizza but with a homemade cheesy topping: 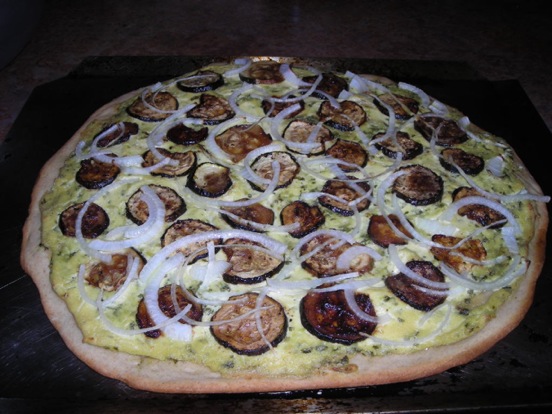 You may be wondering, what is with this "signature zucchini pepperoni?" WELL. Let me tell you. As much as I love pizza, I also try really hard to eat my 5-9 veggie servings a day. Zucchini pepperoni is my way to work in more vegetables and still have something salty and smoky on top of my pizza. Just to let you know, though, zucchini pepperoni is NOT pepperoni. It gives a salty, smoky, flavorful kick similar to pepperoni, but it's not meaty, nor is it going to trick you or anyone you know into the fact that it's not meat or fake meat. It's delicious, though, and worth making at least once.

Put the oil in a large pan (I use 9x13). Swish it around so that the entire bottom of the pan is coated with oil. Add the soy sauce, vinegar, and liquid smoke; swish around the pan so that they mix. Sprinkle over the pepper, garlic powder, oregano and (optional) spice.

Bake at 425 for 15 minutes, then check. Most of the liquid should be gone, and the zucchinis on the edge should be crispy. The middle ones will never quite get crispy, but they shouldn't look soggy--if things are soggy, let it cook for another 5-10 minutes. (Cooking time varies so much because it all depends how thinly sliced the pieces are.) Remove from oven, allow to cool at least a little before putting on pizza so you don't burn yourself. 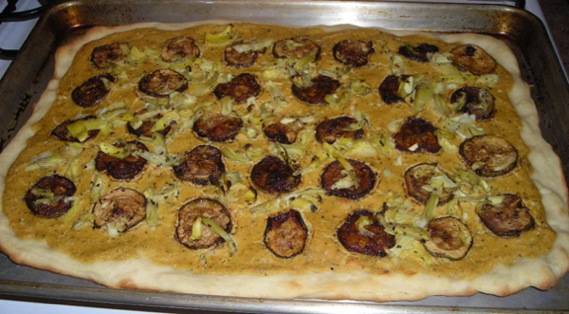 Here is a homemade pizza with zucchini pepperoni, sauteed garlic and artichoke hearts. If you couldn't tell from these pictures, I'm pretty simple when it comes to my toppings: after something cheesy (homemade or store-bought), I like 2 or 3 at the most.
Posted by Sarah P at 9:37 AM

That pizza looks super yummy and I love the idea of pepperoni using zucchini. Innovative.

I haven't had a white pizza in years! You have inspired me.

I love your pizza and the pepperoni-inspired zucchini !
I have read fake tomato sauce using pepper or beetroot, have you ever tried ? (ok this will only do the trick for homemade pizza)