With this entry, we are officially halfway through Vegan MoFo! I'm pretty proud of myself for posting every day so far, and now that I know I'm capable of posting so regularly, I won't have an excuse not to update at least once a week after VeganMoFo ends. 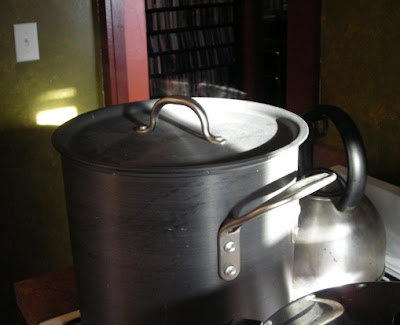 Today I want to post about vegetable stock. Historically, I have not been the biggest fan of soup, but I've finally started to appreciate it, especially after the tooth extraction fiasco. The first ingredient you encounter when making a soup recipe is almost always stock or broth of some sort. I've gone back and forth between using water with a little soy sauce, which is only useful if your soup has many flavorful herbs and spices already. But if you're making a simpler soup that doesn't call for large amounts of herbs and spices, stock is what gives the soup a real depth of flavor.

I've been using Rapunzel's salt-free bouillon cubes, because that is one of the few brands whose veggie stock doesn't contain nightshades or mysterious "spices." It's fine, but the flavor isn't rich or complex. I also tried Imagine's No-Chicken Broth, which is flavorful, but it is absurdly salty. And I think the "spices" gave me a bit of a rash, so they maybe contain nightshades. And none of the packaged substitutes compare with real, homemade veggie stock.

Veggie stock recipes usually call for some whole carrots and whole onions and whole celery sticks, but the first time I made it, I didn't want to waste precious vegetables in case my veggie stock was a failure. So I looked more into the scrap method of cooking veggie stock, and let me tell you, it is the greatest thing ever. Save the ends and peels of vegetables when you're cooking with them. It's like composting, but you should save the scraps in the freezer, because otherwise they'll decompose. I recommend one of those gallon-sized ziploc bags. Every time you chop a vegetable, put the parts you don't cook with into the plastic bag. The only caveat is that you have to wash your vegetables really well so you don't get dirt in your broth. And if you don't eat organic, I'd maybe think twice about putting in peels from the higher-sprayed vegetables (celery, potatoes, carrots, peppers). 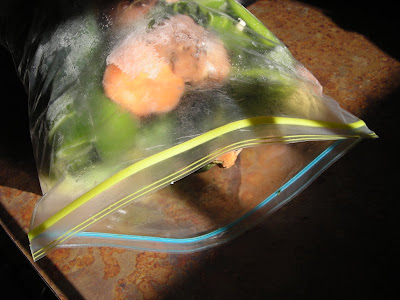 So! Save veggie scraps, freeze them in a container (like a ziploc bag). When the container gets full, remove from freezer. Dump them into a large stock pot. (It's called a stock pot for a reason!) 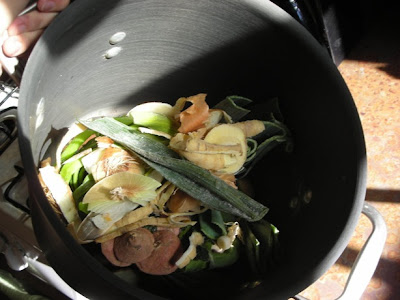 The general rule is that you add twice as much water as you have scraps. I use a gallon-sized plastic bag. 1 gallon = 16 cups, but there's a lot of space between veggies, so I wouldn't say there's a full gallon. If it were a full gallon, I'd need 32 Cups of water, but I put in about 20-24 Cups. Anyway, it's not a precise science. The less water you use, the deeper the flavor of your stock. Obviously, the smaller your container of frozen veggies, the less stock you'll be making.


Cover, and bring the mixture to a boil, stirring occasionally. Once it boils, reduce heat to medium-high, so it doesn't boil over, but so that it stays at a hearty simmer. Let it cook for at least an hour, then check the veggies. They should all look pretty lifeless at this point. If they still look like they have more flavor to impart, let them cook longer. 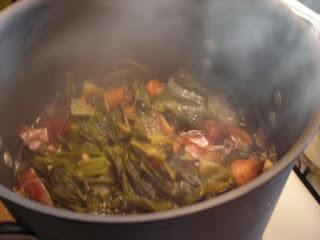 Turn off heat, and let it cool so it won't burn you in the next step, which is to strain the soup. I set a large strainer in a bowl, then pour the stock through the strainer. I lift the strainer out of the bowl, and what's left: veggie stock! However, if you don't have a large bowl or strainer, or you don't want to lift up the whole pot of stock, you can use a slotted spoon or smaller strainer to fish out all the veggie pieces from the pot itself. The point is to remove all the veggie pieces. You can then compost them or throw them away, knowing that you have used all parts of the vegetable, and really got your money's worth out of all of those veggies.
Now you have lots of veggie stock. It keeps 3-4 days in the refrigerator, but will keep forever in the freezer. I divide it up into 2 Cup or 4 Cup portions, then freeze them. 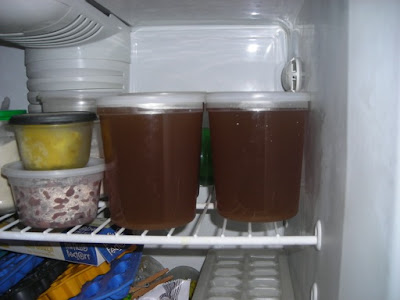 4-Cup containers. (These are yogurt-sized containers.) Look at the gorgeous color! (You can also see a 2-Cup container of frozen beans to the left of the stock. I'm big on saving money and on cooking and freezing things ahead of time.)

Ideally, if you know you're planning to make soup in the next 3-4 days, move the stock out of the freezer and into the fridge 6-8 hours in advance. If you're like me, though, you don't know what you're going to make for dinner until you start making it. However! I have a simple solution: almost every cooked soup recipe calls for you to saute some vegetables before you add the stock. So, if you want to make a soup but all your stock is frozen, here is a cheat: Take the stock out of the freezer just before you chop the veggies and set it on the counter. Proceed with your recipe. Toward the end of the veggies' sauteing time, dump the (frozen) stock in with the veggies. If the stock won't come out of the container, run the container under warm water for a second; it should separate the stock from the container. 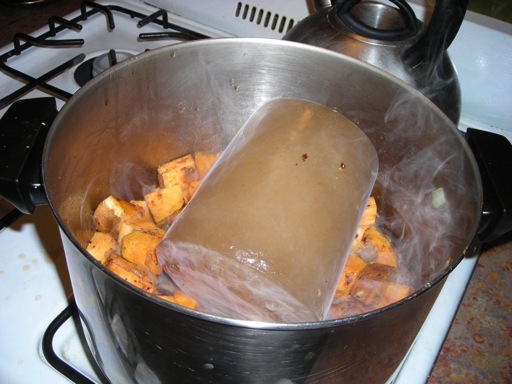 Homemade veggie stock is very easy, and it makes multiple meals' worth of delicious, rich stock--from stuff you would have thrown away otherwise! In terms of veggies, almost anything goes. You really can't get enough of almost all members of the onion family: onion, garlic, leeks, scallions, etc. It's also good to have some sort of scraps from one of the sweeter veggies (carrot, sweet potato, hard squash). Mushrooms are good, too, and any stems from fresh herbs, or used bay leaves. Basically, any vegetable is game for stock except veggies from the cruciferous family, because they are very strong-tasting and long boiling times make them smell funny. So leave out broccoli, kale, cauliflower, cabbage. Also, for the same reason, leave out asparagus. Taste-wise, beets are fine, but know your veggie broth will turn purple or even black if you use them.
Posted by Sarah P at 11:17 AM

I made my own stock for the first time yesterday, I'd never realised how much salt was in the cubes until last week!

Thanks for this! I was actually wondering about this very thing last night. Def will be saving my scraps from now on!

I really need to make my own stock more. It's so much cheaper that way.

Thanks for posting this! I've been saving scraps since I read it and I finally made the stock today! Yum yum!!

Katie--I just made some again today myself! Glad you liked it.

I find adding a splash of tamari or soy sauce in the beginning of cooking time gives it a nice added depth of flavor without making it too salty. Also, a Tbsp or two of vinegar in the beginning helps make it a little more complex, but most of the acid cooks down, so it' still mild.