If you've been around vegan blogs a while, you've probably seen the recipe for Seitan o' Greatness. PPKer Lachesis posted this recipe on the PPK forum, and it seems like every vegan who had access to the internet made it and blogged about it. I was a little late in the game, having only discovered it last year, but now Seitan o' Greatness is my main use for gluten (though Veganomicon's chickpea cutlets are a close second). The recipe makes one large log of seitan, good for sauteeing like a burger or for deli-meat-style slices for sandwiches. We, however, have little use for a seitan log, and a lot of use for SAUSAGES! 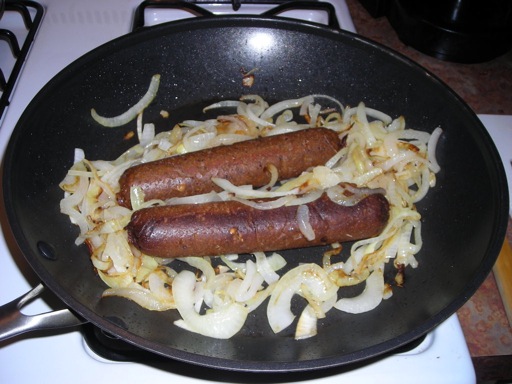 So I've adapted the recipe to make Sausage o' Greatness.
This version is adapted from the original to be nightshade-free, but if you can have nightshades, you can use the original recipe, just prepare the dough this way instead of that way. It makes 4 large sausages, each of which makes for a large serving.

1 1/2 Cups gluten
1/4 Cup nutritional yeast
1/2 to 1 tsp salt (depending on how much of a salt fan you are)
1/4 tsp cinnamon
1/2 tsp cumin
1/8 tsp allspice
2 tsp pepper (less if you don't want it spicy)
2 tsp garlic powder
(If you have a specific flavor in mind, like Italian, or Thanksgiving-y, leave out the cinnamon and add ~2 tsps of other spices: italian seasonings, thyme and sage, curry, etc.)

3/4 cups water
4 tbsp pumpkin puree -AND/OR- replace some of it with 1 Tbsp tamarind paste, and/or 2 Tbsp peanut butter* (some combination of the 3 is good)
2-3 tbsp tamari/soy sauce
2 tbsp extra virgin olive oil
dash of liquid smoke (optional but tasty)

*-I know peanut butter sounds crazy, but you can't taste it in the final product as long as it's 2 Tbsp or less, and it makes the texture smoother. Chunky peanut butter helps give even more of a convincing sausage texture.)

Preheat the oven to 350. Combine all of the dry ingredients in a large bowl. Add all of the wet ingredients, and mix well, with a fork if that helps. After a minute or two of stirring, it will be a thick dough; turn this out on a cutting board and knead it a few times, until all the ingredients are incorporated and the dough's texture is consistent. The dough should be pretty stringy; if not, knead until it is. If this sounds like a lot of work, don't worry--this whole process normally takes less than five minutes. Now, form the dough loaf into a circle. Cut it into four equal pieces.

Take a medium-sized sheet of foil. Shape one of the quarters of the seitan into a log, snake-like. Put it on the bottom edge of the foil, making sure to leave at least an inch or two on either end of the log. Roll up the foil, like a sushi roll or wrap, and once it's a long foil tube, twist the ends shut. Tight is good, but don't make it TOO tight, since seitan expands a little when heated. Now that you've done it for one sausage, the other three are a breeze. Once you have four little foil-wrapped sausages, place them in the oven (I do it directly on the rack, but if that makes you nervous, put them on a baking sheet first). Bake for 45 minutes, turning at least once during cooking. Once done, the packages should be firm; if they seem a little soft, try 10 more minutes in the oven.

You can eat the sausages as-is, but they're also really good browned in a skillet in a small amount of oil, and/or with onions, as above.

Another delicious use of these sausages is Beer Braised Sausages with Warm Potato Salad, a recipe I took from Martha Stewart. 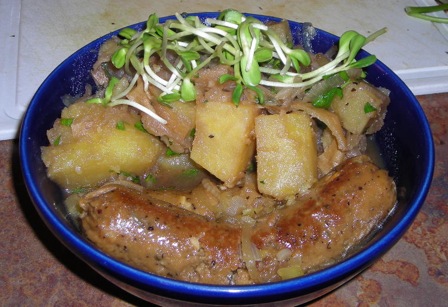 I used white sweet potatoes in lieu of potatoes. The boyfriend brews his own beer, so we always have beer around the house. The dish tasted very... German. I am unconvinced as to whether I like beer with potatoes, but it was a great compliment to the sausages, and the boyfriend really enjoyed the whole meal.
Posted by Sarah P at 9:24 AM

I love those sausages, yours look great.

I've never made that recipe but your pictures of them with the onions could change that.