know what I'm thankful for? My oven.

Or, How I Learned to Stop Worrying and Love Kitchen Appliances.

Happy Thanksgiving! I'm in upstate New York for a couple days, with little access to the internet, so I wrote this post (and the next couple days' posts) ahead of time. Whether you celebrate the day or not, I wish you all good food and the ability to recognize the good things in your life--today and every day!

I am thankful for many things, and I like to think I have an idea of how lucky I am in life, but there are always things you take for granted. For example, THE OVEN. And THE STOVE. Think about it: how much of your food today, or any day, would be possible without one? Earlier this month, we didn't have gas at our house for almost two weeks, and since we have a gas oven/stove, I went two weeks figuring out how to cook in a kitchen without any fire.

Gas ovens and stoves have been around for about a hundred years; before that, people still cooked on heating stoves, in fireplaces, and in ovens built into fireplaces. I found myself wishing for the first time that our adorable decorative fireplace was functional. Alas, I had to figure out how to make two weeks' worth of meals (well, okay, we went out to eat twice, out of desperation) without fire.

Some of you are probably laughing at how easy this sounds: there are many heat-generating appliances in the kitchen! But while I cook constantly, and while I cook well, I am conversant in only the most basic of kitchen appliances. Stove, oven, toaster, food processor. Even the blender confuses me sometimes. We don't have a microwave. Before a year ago, I never knew how to use a rice cooker. Our toaster oven intimidates me (toasters are so much simpler!) with its non-numerical settings (what kind of setting is "frozen foods?" Is it supposed to thaw things, or cook them through, or...?). I've never made successful waffles in my waffle iron. But in the early days of November, I learned how to love the toaster oven, the rice cooker, and my waffle iron.

Well, no, I still don't actually love them. But I sure learned how to use them.

First timid step, turn the plates in my waffle iron over to use the "griddle" side, which I tried once and gave up on after everything stuck even though it's supposed to be nonstick. I made savory pancakes, first putting some chopped leeks and carrots on the griddle with some oil, Mongolian-grill style. Once softened, I scraped them off the griddle into pancake batter, then poured the batter on the griddle. 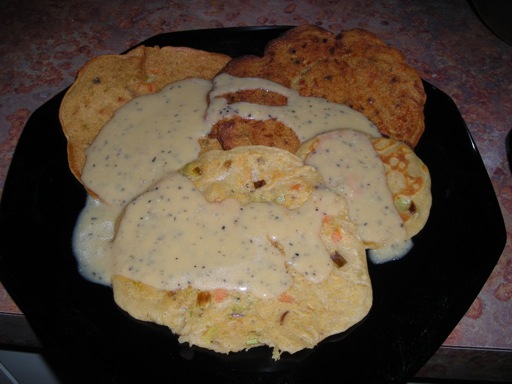 Result? Some tasty pancakes! I used hot water from the tap to dissolve some miso with black pepper and oil for emulsifying, so it was sort of a gravy (because the water didn't stay how long, it was actually more like a thick salad dressing, but it was tasty!). It turns out it's probably not my appliance ineptitude; this griddle takes a lot of time to get hot, then at no matter what setting, it gets really hot and everything still sticks to it. The food was good, but the process was not fun. So no more of the griddle, I figured. That's cool, I still have THE RICE COOKER.

I'm not completely rice-cooker challenged; it's just that I'm not comfortable with it, since I've always been a boil-your-rice-in-a-pan kind of girl. In the last year or so, since I moved in with the boyfriend, his rice cooker and I have come to an uneasy truce, as using it allows me more space on the stove. I have always imagined that grains other than rice would work in a rice cooker, so my first adventure was to cook quinoa in it for a quinoa salad. That went well, so later in the week, I decided to step it up a little; I made paella by turning on the cooker and leaving the top open to sautee veggies with some oil, cooking those till soft, then adding the rice and some flavorings before finally closing it. After it shut off (as it does when it's done), I turned it back on to get the crispy rice along the bottom/sides. It was pretty good, though it got a little mushy. I even made some pasta in the rice cooker (by boiling water in it, then cooking pasta accordingly) and tossed it with roasted veggies (from the toaster oven) some arugula, and a vegenaise-mustard-vinegar sauce to make a tasty pasta salad. 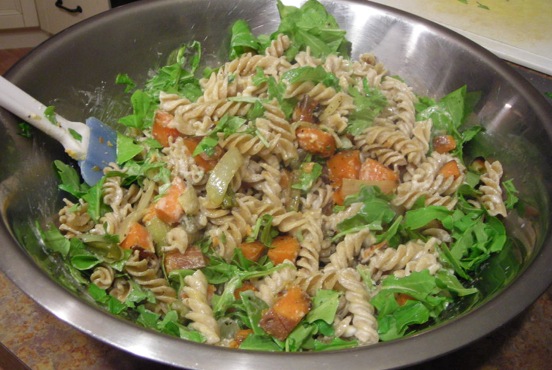 At this point I felt pretty confident with my rice cooker skills, so for my next big experiment: SOUP IN A RICE COOKER. 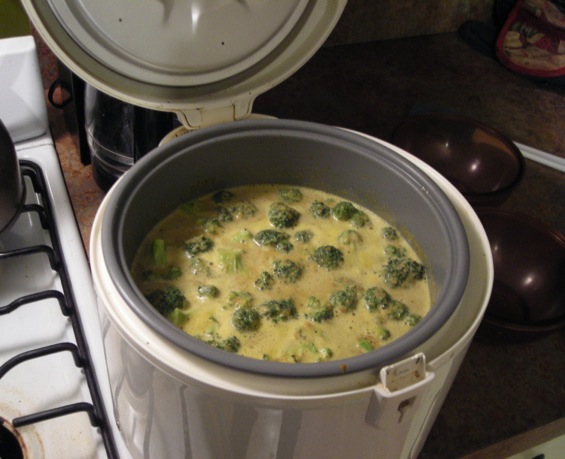 Broccoli and Pumpkin Cheese Soup from Vegan Today. This was delicious, though I didn't cook the carrots long enough, so they didn't get super smooth when blended. I served it with toast, from the toaster oven. 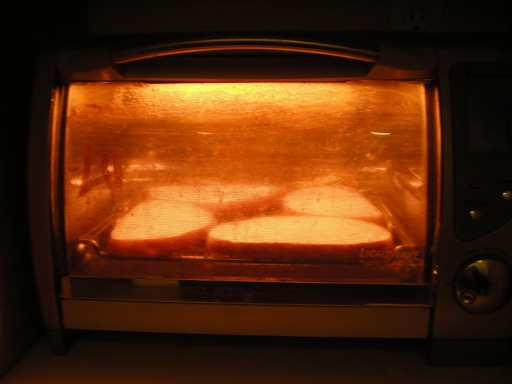 It looks evil, but the toaster oven became my best friend for two weeks. I started out only using it to toast bread as a side for whatever else I was making.

For example, I made Chilled Avocado Soup, from the Elephant Walk's recipe. 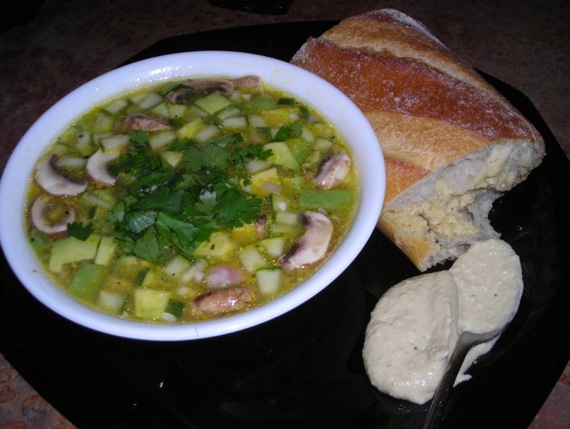 The Elephant Walk is an upscale French/Cambodian restaurant that is surprisingly good to vegans. I can't have the soup at the restaurant because it has tomatoes, but upon hearing people rave about it, I made it at home without them. It was easy to make without a stove, as the soup is raw. It was good, but be generous with the avocado, since it's the only thing that really helps cut the acidity. We had a side of warm bread with cheese sauce, courtesy of the toaster oven.

Soon, however, I wanted more than bread. Two weeks without baked goods is, for me, a very sad two weeks. And/or an impossibility. Neither muffin tins nor baking sheets fit in the toaster oven, but it CAN hold 8x8 baking dishes and springform pans, so I opted for brownies. 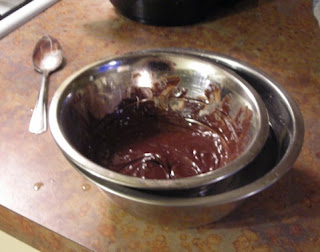 Melting chocolate without a stove is not so easy, though. I made a makeshift bain-marie with two bowls, filling the bottom one with hot water from the tap. I covered it and let it sit for five minutes, then stirred the chocolate and replaced the water (which had cooled) with hotter water--the whole process took almost half an hour. But! The chocolate melted, and two cycles of the toaster oven's "Cake" setting later, I had brownies! And not just any brownies: 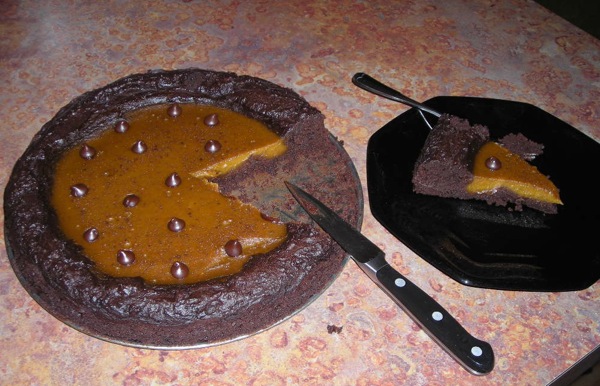 Pumpkin Pie Brownies, from Vegan Cookies Invade Your Cookie Jar. (Online version of this recipe here.) Because I had to guess at cooking times and temperatures (surprisingly, the "cake" setting isn't 350, but ranges between 325 and 350, and the cycle is only 25 minutes, so I had to run it twice), I was worried it'd be a little dried out, but I really think this was the best recipe I could've gone for, since all the pumpkin kept it nice and moist. We had a bunch of friends over shortly after I made these, and everyone was crazy about them.

With successful toaster-oven brownies under my belt, I felt like I could handle anything, so I took on a FULL HOMEMADE TOASTER OVEN MEAL. 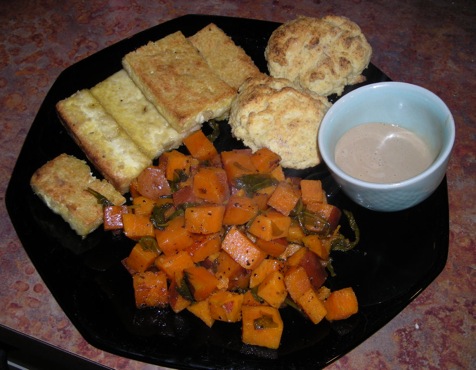 I felt like toaster oven McGuyver! Oven-fried tofu, roasted sweet potatoes with arugula, and biscuits. (I made a quick balsamic sauce on the side, in case things were too dry.) This took a lot of advanced planning, as obviously all these things can't go into a toaster oven at the same time. I made the biscuits first; they're the cornbread biscuits from Vegan Brunch, my latest carb crush. Half a recipe would fit on the tiny baking tray that comes with the toaster oven. Then, I tossed chopped sweet potatoes and arugula in salt, pepper and oil, then folded them all up into a foil packet. These went into the toaster oven on one of the higher settings ("Frozen Foods," I think, or "Roast." I imagine this is somewhere around 425).

THEN the Oven-Fried Tofu!
This is actually really easy, and can be made in any kind of oven. It serves 3-4, depending on how much other food is on your plate.

1-2 Tbsp vegan margarine (I use Earth Balance)
1/2 C flour
1-2 tsp dried herbs: I like sage and garlic powder, but you can add any you'd like.
1/2 tsp salt
1/4 tsp pepper
1 16-oz block of tofu, sliced into slabs (their thickness is really determined by how many you can fit into your pan. 8 can be squeezed into an 8x8 baking dish, 10 into an 8X12, so cut it according to your pan size.)

If you have an oven, preheat it to 425. (I only had a toaster oven, and it was already on.) Put the margarine in a baking dish, then put the baking dish in the oven so the maragrine melts while it preheats.

Combine the flour and seasonings in a large ziploc bag. Put in all the tofu slabs, and SHAKE LIKE CRAZY until all the slabs are coated.

Take the baking dish out of the oven, and swirl it around so the bottom is coated with margarine. Take the tofu slabs out of the plastic bag one by one, shaking them a little to get off excess flour. You only want a thin coating of flour on each piece. Put the tofu in the pan, then placei n the oven. Cook for 20-30 minutes, flipping the tofu about 15 minutes in. You want the tofu to get at least a little golden on both sides before it's done. Serve with a dipping sauce or gravy.

Having only a toaster oven, I made this recipe and set the pan on top of the foil packet of veggies. Everything took a little longer than normal, but came out great, and super hot. While I put those on the plate, I popped the bisuits back in the toaster oven on "toast" for a minute or two, just to warm them up, and we had a full meal from the toaster oven! And fortunately had our gas hooked back up soon after.

I'm glad to know that if for some reason we don't have gas again, I can still eat well, but right now, I am SO thankful to have our oven back.
Posted by Sarah P at 5:13 PM

Glowing toaster over beckons you!

You ARE a kitchen McGyver ! Congrats for making the most of what you had in hand !
I am especially impressed by your rice cooker-paella and soup !

I Want To Appreciate Dr.OYAGU for his great deeds, I Was Diagnosed With type 2 Herpes Virus Last year,And i Was Looking For Solution To Be Cured Luckily I Saw Testimonies On How Dr.OYAGU Cure Herpes Virus I Decided To Contact Dr.OYAGU I Contacted Him He Prepared A Herbal Medicine Portion And Sent It To Me,I Started The Herbal Medicine For My Health.He Gave Me Step By Step Instructions On How To Apply It, When I Applied It As Instructed, I Was Cured Of This Deadly Herpes Within 2 weeks, I Am Now Herpes Negative.My Brother And Sister I No That There Are So Many People That Have The Same Herpes Virus Please contact Dr OYAGU To Help You Too,And Help Me To Thank Dr.OYAGU For Cure Me, I’m Cured By Dr. OYAGU Herbal Medicine,His Contact Email:oyaguherbalhome@gmail.com
Or Cell Whatsapp Number +2348101755322 thank you