the amazing adventures of kavalier and clay: macaroni and cheese

I love food and I love to read. As a result, the first week of each month, I'll combine these two interests in a post about food from literature. I'll mostly be sticking with books from classic literature, so you're likely to know the storylines anyway, but just in case you don't: warning: there may be spoilers ahead.

The Amazing Adventures of Kavalier and Clay is too new to be a classic, as Michael Chabon published it in 2000. However, it received a Pulitzer Prize in 2001, and, like Wolfe's The Bonfire of the Vanities and Lethem's The Fortress of Solitude, it is one of those realist novels that I think will go down in history as Very Important Texts from the Turn of the 21st Century. (Isn't it strange to think that someday people might take an English class with that title--as a historical, and not contemporary, literature class?) Because it's new, I guess this will be more of a review than anything else, because I don't want to risk the boyfriend reading any spoilers here (I'm making him read it next). 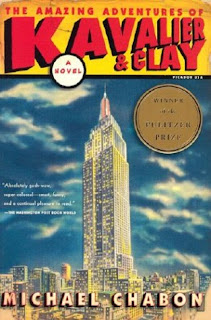 The Amazing Adventures of Kavalier and Clay begins just before WWII, and focuses on a young Czech man, Joe Kavalier, whose family and friends help him escape the country. He comes to America and, with his cousin Sam Clay, creates the Escapist, a comic-book superhero who can escape any situation and frees innocents from oppression. The Escapist becomes as famous as Superman, and the book deals with the men's lives throughout the rise and fall of the Escapist.

Chabon, the author, does a brilliant job of visiting and revisiting themes, playing them out in new ways and in old ways, creating these intricate patterns of his characters' lives that we know are contrived, but we want to believe. Amazing things happen to characters--and we believe them because we want to. Reading The Amazing Kavalire and Clay gives you the same kind of thrill as reading a comic book. Its structure is like a superhero comic. What's more, it's like one of the comics the characters create: Joe himself is a deeply flawed, but strong, inspiring, handsome and kind character, an orphan in a new land, who escapes every situation he can, and his cousin is like the stock comic-book sidekick: small, eager, quick on his feet, tagging along on the more dynamic people's adventures. Even Rosa, the main love interest, could be a female superhero: she's strong, firm, always knows what to do, has a crazy dreamy powerful artistic persona, and then a normal, mousy daytime look. And all the while, the book is actually "just" about the ins and outs of growing up, discovering one's identity, and living in the shadow of war. These themes are stirring in themselves, but one of the reasons I find this novel so amazing is because it doesn't use any real gimmicks, but it takes a sort of amalgamation of an WWII-era bildungsroman and sturm und drang and makes it read like a comic book. Does this make any sense? I don't want to spoil the wonderful narrative and dizzying (in a good way) story arcs in case you haven't read it, so I won't cite many specifics, but this realist novel is as lurid and action-packed as any early Superman comic book.

The biggest theme of The Amazing Adventures of Kavalier and Clay, if you didn't already catch it from the name of the superhero the men invent, is escapism. Through the characters' actions, the book explores what escape means, what a person can and can't escape from, and how different kinds of people understand escaping. There is a nice moment about 3/4 of the way through the book where Joe reads a comic book and thinks that the reason people attack comic books--the fact that they provide escape--is exactly the reason he finds them comforting. There is not much else in this book that Joe finds comforting... except Macaroni and Cheese!

Okay, that's sort of a stretch. But there is a scene in the book where Joe, needing comfort for multiple reasons, eats a prodigious amount of macaroni and cheese that Rosa had made. Rosa, who cooks to comfort and to nourish people around her throughout the book, is at this point dissatisfied with her life--and the fact that this stands out so much from the exotic foods she had been proud to make earlier in the book. "Macaroni and cheese. It seemed, as a dish, to exist at the very center of her sense of embarrassment over her life," but she makes it, knowing that it will comfort and nourish her family. Because I think almost anyone would agree that, as unglamorous or exotic as it may seem, macaroni and cheese is a comfort food.

I have tried several variations on vegan macaroni and cheese, but I wasn't keen on many of them, esepcially since a surprising number call for grated vegan cheese. I'm not big on packaged vegan cheese, since it's often very salty and rarely all that healthy. I found a VegWeb recipe for the "Best Vegan Mac and Cheese in the entire world" that was pretty close to what I had in mind, but I have made several changes. First, that recipe uses a strange amount of pasta: 1.5 pounds, when most pasta comes in 1-pound packages. Second, the amount of oil and salt is too much, even for me. And I can't have paprika. So, I present to you my version. It can be gluten-free if you use non-gluten noodles, and is very delicious with broccoli on the side.

This picture features some reheated leftovers with broccoli, because I am too impatient to eat it whenever I take it out of the oven to take any pictures, but I think even the leftovers look tasty... 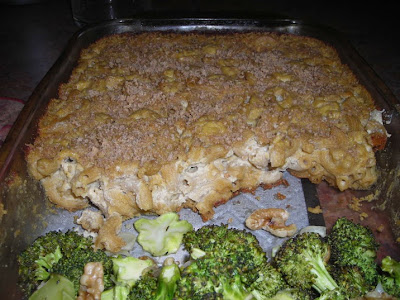 Preheat the over to 375. Boil the macaroni as directed by the bag it comes in. Al dente is better than mushy.

Combine all of the other ingredients, except the bread crumbs, in a blender. Blend until smooth. It should be thicker than soymilk in texture, about the texture of coconut milk. If not, add a little more water and blend. Taste it and blend in more garlic, tamari, or pepper if you want.

Pour the pasta in a 9x13 glass pan, or in a large casserole dish. (In The Amazing Adventures of Kavalier and Clay, Rosa uses a "white Corning casserole with [a] blue flower on the side," if you want to be authentic). Over top of that, pour the cheesy mixture, and stir well. Depending on the size of your dish, it may not quite cover the pasta; that's okay. Just make sure all the noodles have gotten wet as you stir. Smooth the mixture semi-flat with the back of a spoon or spatula, then sprinkle bread crumbs over the top.

Bake for 15-20 minutes, or until most of the liquid has been absorbed. Allow to cool for a couple minutes before serving.

You can refrigerate leftovers for 3-4 days. Add a little water to the bottom of the pan when you reheat it. You can also freeze leftovers and they'll keep for aaaaaages.
Posted by Sarah P at 9:42 AM

I've been craving mac and cheese all day, I think I'll give this recipe a shot. :)

Oh my. I love a baked mac and cheese, especially when it has nooch and not a processed cheese.