stew from melomeals, and a non-profit you should really know about

Two days ago, Melody over at melomeals posted a recipe for Creamy White Bean Stew with Collards. Not only did it sound delicious, but with pre-cooked beans, she claimed the recipe comes together in 30 minutes. I came home late-ish and starving on Tuesday night, so I put this claim to the test! Unlike most stews, which need a lot of cooking time to develop their flavors, this recipe really does come together in half an hour, and it is delicious, hearty, and warming (which is important, because we are in the middle of some boiler issues and won't have heat till tomorrow). I didn't have poultry seasoning, so I used a variety of herbs and spices--a pinch each of onion and garlic powders, sage, thyme, parsley. I also didn't have any "nutritional yeast base sauce" made up ahead of time (though that's a cool idea of Melody's, making a big batch of cheesy sauce to last you throughout the week. I suspect the boyfriend would eat it all in one go, though, since he's a sucker for cheesy sauces), so I added each of its parts to the stew individually. I put in 1/4 C nutritional yeast, a bit of mustard and garlic powder, and 1/2 C water when it says to add the nutritional yeast sauce. Toward the end of the cooking time I stirred a tablespoon or so of arrowroot powder into another 1/4 C water, and stirred that into the stew. It was so delicious!

I made the cornbread biscuits from Vegan Brunch to go along with it. I am a huge fan of all things that involve cornmeal, so I can't believe I'd never tried these! They are ridiculously easy to make, taking about 20 minutes from when you first get out the ingredients to when you pull them out of the oven. 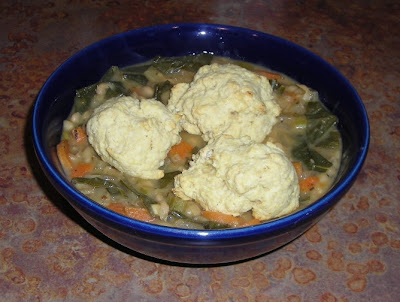 The combination of the two was awesome.

As a sort of public service announcement, one of the things that makes me come home late-ish (and anxious for a quick-cooking meal like the afore-mentioned stew) each week is the volunteer work I do for a non-profit called RfBD, or Recording for the Blind and Dyslexic. It is an organization that records textbooks for students with disabilities--physical or learning-related--that prevent them from reading at the pace of their peers. RfBD offers students audio files of their textbooks, allowing them to navigate their texts by page, chapter, section, etc, just as if they were working with a book. Because there are hundreds of textbooks to record for students from elementary to graduate school levels, RfBD relies heavily on volunteers to record the content of the books.

Volunteering has always been important to me, and helping people with learning differences and visual impairments is another cause in which I'm personally invested. As a volunteer, I spend 2 hours a week in a sound-proof booth, reading aloud. I was a radio kid in college, and doing this soothes the part of me that misses having a radio show. The training was easy, and if you don't feel like recording, they have other tasks for volunteers to do. RfBD (which is about to change its name, since they cater to a much wider variety of people than only those who are blind or dyslexic) has been around since at least the 1960s (possibly the 50s?), and has over 20 locations in 14 states; they also have some satellite locations in other places. I've been volunteering for them for almost 3 years now, and I intend to do so for many more. If you're looking for a way to spend some of your time (or money; they take donations) helping other people, this is a great way to do it. (Plus, if you're moderately antisocial like I am, this allows you to help people without actually spending time with people--you're in a sound-proof booth!)

Tomorrow, and every Friday this November, I'm going to run a series of entries on how to replace nightshades, since, if you are allergic to nightshades, or just ever try to avoid them, you'll know that you need a little help sometimes. Or a lot of the time. Or every time you open a cookbook. Stay tuned!
Posted by Sarah P at 10:36 AM

I recently made the leek and bean cassoulet from Veganomicon for the first time and I am now a proponent of putting all forms of biscuit and bread on top of the stew or casserole. That looks dang good.

What a great cause! Volunteering is near and dear to my heart too..

I'm so glad you liked the stew and it worked out for you. I love the cornmeal biscuits on top!