A little while ago, the boyfriend and I discovered a little gourmet foods store while we were on a walk. We decided to check it out, and were disappointed to find that it stocks a lot of the same stuff we can get at our co-op, but is also one of those places that's so proud of their charcuterie counter and their exotic smelly cheeses. So we were about to leave the store empty-handed, when we noticed, right by the exit--a display of vegan candy bars!

Now that I know what to look for, I've since seen (and bought) these candy bars at our co-op, and Whole Foods carries them, too. Go Max Go is the name of the company who makes them. Their mission is to make a vegan candy bar with no hydrogentated oils or high fructose corns syrup. They produce four styles of vegan candy bar, each modeled after an existing non-vegan kind. (Which is to say, the kind you miss!) The "Jokerz" bar is like a Snickers, the "Twilight" bar is like a (U.S.) Milky Way, the "Buccaneer" bar is like a (U.S.) Three Musketeers, and the "Mahalo" bar (the one not shown here) is just like an Almond Joy.

For the sake of your edification, dear reader, I took it upon myself to try each one. I only took pictures of three, though. I ate the Mahalo too quickly. (Uh, but I swear I ate these all over time, not on the same day!)

I'll review them in order of my favorites! The Mahalo, the Almond-Joy-ish one, was my favorite by far. For those of you who have had an Almond Joy, that's what this is! For those of you who haven't, it's a sweet, moist coconut base with a couple almonds whole on the very top, then the whole thing coated in chocolate. Delicious. Sorry I didn't take a picture, but there's a nice one on the "Products" page of the Go Max Go Website.

My next favorite: the Twilight bar. This is a Milky Way knock-off. 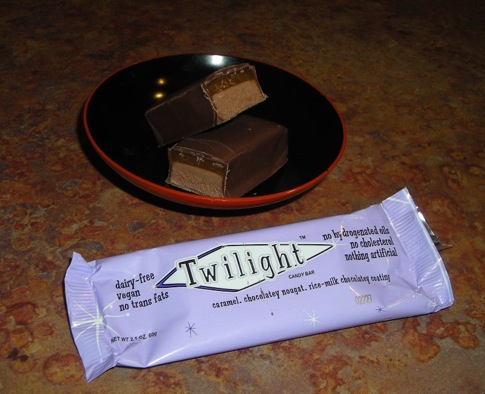 I assume most of you know your basic candy bars, but there may be some confusion: "Milky Ways" are called "Mars Bars" ourside the US. It is a layer of nougat topped with a layer of caramel, coated in chocolate. When I was little, Milky Ways were among my favorite candys, because the caramel was really good. I ate the nougat just to get to the caramel... and I kinda feel the same way about the Twilight. The nougat is a little gummy, with a very slight chocolate flavor. The caramel is a little grainy and not as firm as I remember Milky Ways', but it tastes awesome.

A right behind the Twilight bar in my opinion is the Jokerz bar, which resembles a Snickers bar. 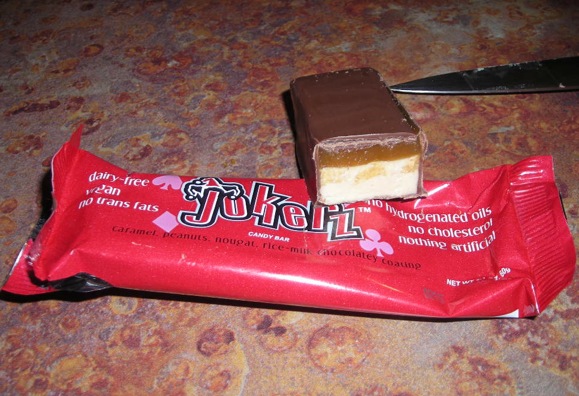 It's just like the Twilight bar, but with peanuts inside as well.

Finally, the Buccaneers bar, which resembles a US Three Musketeers Bar (or a European/Austrialian Milky Way). 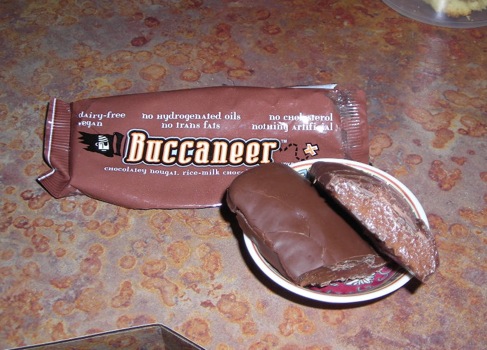 It's light, chocolate-flavored nougat coated in chocolate. I'm not really crazy about nougat to begin with, and I never used to eat Three Musketeers bars, but the boyfriend was realy excited about this one; it's his favorite. I find the nougat a little gummy and a little too sweet.

So! Pros: Your favorite childhood candy bars--but vegan! That's a pretty big pro. Also, the chocolate on all these candy bars is a pretty decent quality for a candy bar. You can actually taste it as chocolate. And the caramel is rich and flavorful.

Cons: Maybe it's just because I'm a grown up now (ha), but these things are very sweet. I'm not really into super sugary things; I tend to try to reduce sugar in my recipes and I prefer very dark chocolate, so it may just be that my taste buds aren't used to candy-bar levels of sweetness. The boyfriend and I split each bar, because one alone would be too much sugar for our mouths to handle. (You know how if you eat too much sugar, the back of your mouth feels weird?) But again, that might just be me. Also, almost all of the bars have barley malt, so they aren't gluten free, so sorry gluten-free vegans.

Have any of you tried the Go Max Go candy bars? What do you think? Are there other (high-fructose-corn-syrup-and-hydrogenated-oil-free) vegan candy bars out there I don't know about?

Note: Go Max Go doesn't endorse or even know about this review; I just got excited to see vegan candy bars in a store, so I bought them and decided to let you know what I thought.
Posted by Sarah P at 9:15 AM