today is basically the greatest day

November 1 of each year is World Vegan Day--so happy World Vegan Day! It is also, coincidentally but importantly, the first day of the VEGAN MONTH OF FOOD! Happy Vegan Mofo, everyone!

Though this is the fourth year of Vegan Mofo, it is the first year I've been able to participate. I have not been super consistent in my posting in the past, but this month, I'm planning on posting a blog entry every day.

November 1 is also the Day of the Dead, which, as I discussed a couple years ago, is my perfect holiday. I'm not of Mexican descent, nor do I live anywhere near Mexico, but I think the Day of the Dead is a really great holiday, whose aesthetics and meaning I respect and adore. Anyway, you can go back to that entry to see my recipes for Dead Bread (Pan de Muerto) and Tamale casserole, and for dessert, you can stay here for: 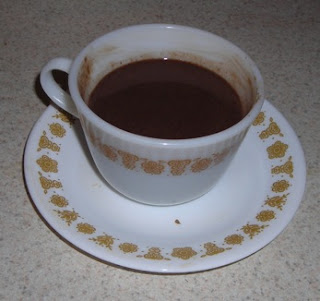 If I had had the wherewithal (ie, marzipan or marshmallows), I'd've sculpted a little skull to float on top.

Mexican hot chocolate, if you haven't had it, is a little spicier and a lot thicker than what we Americans associate with hot chocolate. As a general rule, when making it at home, use 1 oz chocolate per 1 cup liquid per serving; the rest is to taste.

A traditional recipe should look something like this. It serves two but is easy to reduce or scale up for different amounts of people.

In a small pan, combine all of the ingredients except the vanilla over low heat. Stir constantly, until all the chocolate has melted and the liquid is smooth. Remove from heat, remove cinnamon stick, and stir in the vanilla. Pour into two cups and serve.

You can adapt this recipe in a number of ways. If you don't have baking chocolate, replace each ounce with 1/4 cup of chocolate chips, and leave out the sugar. If you don't want any spices getting in the way of your chocolate fix, leave out the cinnamon and nutmeg, or use a tiny bit of powdered cinnamon for just a small amount. You can also add small punches of cayenne, cloves, and/or allspice.

Taza is a small chocolate company located about a mile from my house, where they roast and grind the chocolate and make it into bars right on the premises. They buy organic sugar and their organic chocolate comes directly from farmers in Latin America, ensuring fair prices and high quality in their products. Also, all of their products are vegan. They sell candy bars, cocoa nibs, and other tasty prducts, but sometimes I just eat the Chocolate Mexicano discs straight. (They come 2 to a pack, so it's like they expect that.)
Posted by Sarah P at 11:16 AM

those chocolates look cool. i'll have to check them out sometime.

They do look rather cool.