I never really watch the Superbowl, but I've never missed one. That is, every year, I end up in a room with people who are watching it, sometimes even voluntarily. I'm not a big football fan, but I always seem to be surrounded by people who are. My father, for example, my brothers, my friends and now my roommate, who is a HUGE Patriots fan. So when roommate Mish suggested a superbowl party - what's more, an all-girl, potluck (snacks) superbowl party - I could not refuse!

Here's what we provided: 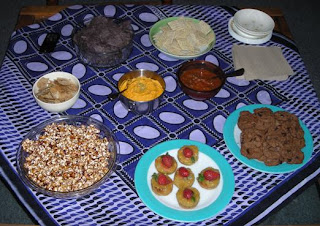 We had chips of all kinds (corn chips, all-natural triscuit equivalent [Quilts!], Mish's amazing homemade pita chips), so we needed some dip to go with it. Hummus and salsa are standard, of course, but we also had Veganomicon's Curried Carrot Dip: 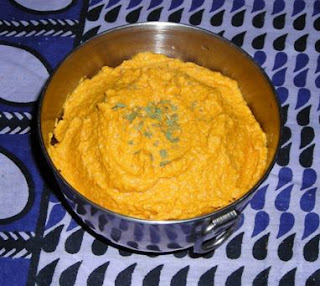 I was worried "Curried Carrot Dip" would sound a little too foodie/vegan for our guests, but everyone dug right in. This was a big hit! and since I am obsessed with carrots, of course I loved it. I used some of the leftovers for a tasty sandwich spread earlier this week.

Mish has a super-decadent, VERY not-vegan Williams-Sonoma Dessert Cookbook, in which every recipe calls for approximately 5 cups of butter and 10 eggs. She kindly veganized (earth balance and flax seeds - hooray!) the chocolate chocolate chip recipe: 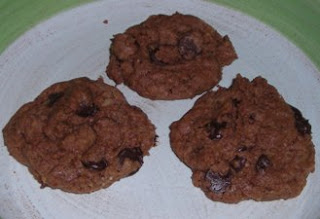 ("I really did it just so I could be on your blog," she joked.) I ate four that day.

And because one dessert is not enough: pineapple right-side-up cupcakes from vegan cupcakes take over the world!

I used almost entirely whole wheat flour for this recipe, and the pineapple I used didn't have a lot of juice in the can, so the cupcakes came out pretty squat and dense: 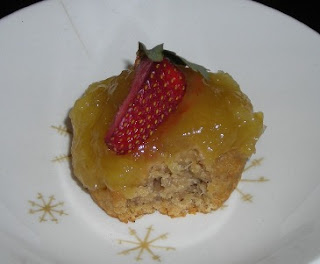 But needless to say, they were delicious.

I even used what was left in the blender after making the recipe to make a little pineapple-soyyogurt smoothie! 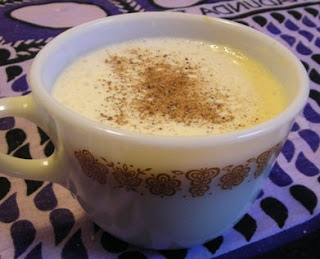 Finally, I will actually post a recipe for you. I am a big fan of Cracker Jack, but not a big fan of high fructose corn syrup or all the pesticides involved in producing non-organic peanuts. So I have come up with a solution to this problem: 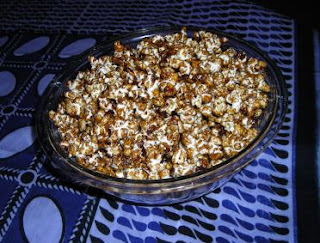 Heat the oil and popcorn kernels in a large (6-quart) pan over medium heat, partially covered. Once the kernels start to pop (1-2 minutes later), cover all the way and shake continuously until most of the popping stops. Remove from heat, keep covered until all popping stops. This whole process takes maybe 5 minutes.

Now make the topping! In a small pan, combine all topping ingredients and bring to a boil over medium heat, stirring constantly. Stir for about 30 seconds after it has reached a boil, then remove from heat. Pour over popcorn and mix well! Add optional peanuts now if you so desire, then let it cool for a few minutes before serving, stirring occasionally. 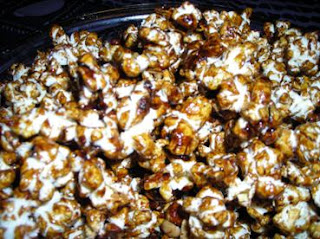 I am off to New York City for a work meeting thing this weekend - I'm going to try to hit up as many vegan restaurants as I can. Wish me luck!
Posted by Sarah P at 5:23 PM

Thanks for the cracker jack-y recipe! I used to be addicted to the stuff, but it's so processed that I'd rather make it myself. =) Looks so good. *bookmarks*

Now that's my idea of a superbowl party!

A fine and healthy idea to cover pop-corns. thanks.

I love the popcorn! For vegan pizza & brownies you should try Pizza Fusion. Then you can have a vegan pizza party too!

I hate watching sports, football the most. But when there is an excuse to have a party, why not!

The spread looks great. I'd be gobbling everything up, myself.

And I just had to laugh at the '5 cups of butter and 10 eggs' bit. Aren't they all just that way!Especially vegetarian cookbooks. They might as well change 'vegetarian' to 'cheese-atarian'!

I love the soy-smoothie! And believe it or not, my grandma actually has those exact same teacups!

Have a wonderful time in NYC! Enjoy the yummy food, & don't forget to report back about it on your blog :)

Wow, I bet that spread would make even the biggest football-hater a Superbowl fan!

Have fun in New York, you lucky girl!

that cracker jack-y recipe is too fun!! love it!! have a WONDERFUL time in NY!

So cool that your friend veganized a cookie recipe... and made it on your blog!
And the popcorn sounds like a great snack.
Can't wait to hear about all the vegan food in NYC!!