spring is here! and so are radishes

It finally feels like spring in Boston! The weather is warm, we've been seeing the sun almost every day, and trees and gardens are bursting with beautiful, fragrant flowers. My allergies have started acting up, but it is WORTH IT. This weekend, for example, the boyfriend and I just sat in the park. Without coats! I love being able to see the sun again. 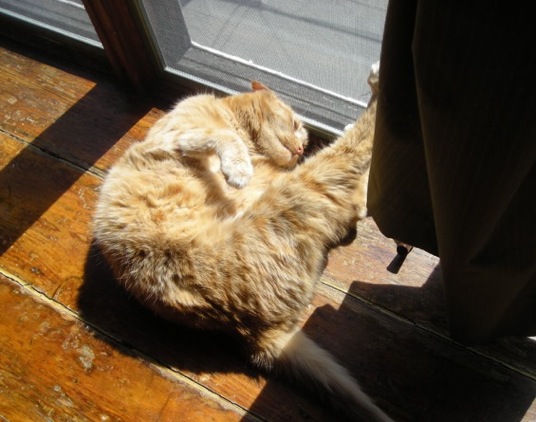 Fritz loves it too! He spends quite a while each morning basking in the sun, rolling around to soak up as much as he can. The other cats like it okay, but they are not as sun-obsessed as me and Fritz.

As if the sun, flowers, and allergies weren't enough of a sign of spring's arrival, radishes have been showing up at our co-op! Until a year or two ago, I thought I didn't care about radishes. I had only ever had them sliced over salads, and they always seemed fine, but not anything to seek out or take much interest in. But at the first hint of spring they show up in the markets, and they are so cute and fresh and vibrant at a time when most of the world is gray that I cannot help but think there's something special about them!

The trick with radishes is to get them fresh; they are crisp and moist and have a delicate, peppery flavor. The older they get, the "woodier" they get--and, I JUST discovered, they get spicier as they get older, too. So try to use the freshest possible radishes for the following recipes. 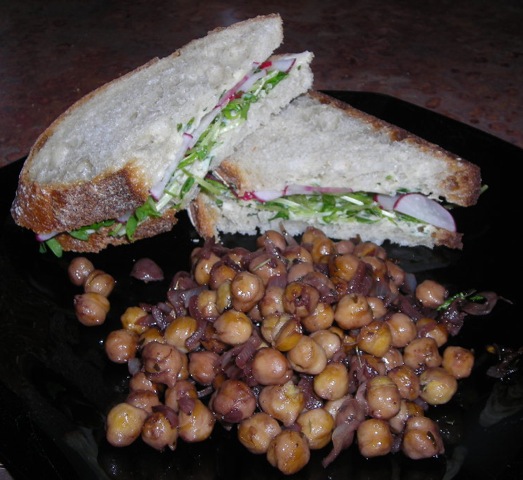 I made a compound butter by mixing a stick of Earth Balance with a couple Tbsps of chopped tarragon, which I think of as being a very French herb; the tarragon plays off the flavor of the radishes well. Anyway, a layer of compound butter, a layer of pea shoots (also something widely available in spring), and a layer of thinly sliced radishes. For bread, you don't want something with too hearty a flavor, since you're working with delicate flavors and textures. While I normally try to eat mostly whole grains, a white bread is probably better here. (I think I used a sourdough bread above.)

The sandwich recipe works best with very fresh radishes. But if you accidentally leave your radishes in the fridge too long and they start to get a little spicy, or you're worried they might be getting old, you can always pickle them!

I got this recipe for pickled radishes here, and I love it! It's called "Bread-and-Butter Radishes," but they aren't quite as sweet as the bread-and-butter pickles you might buy to put on sandwiches. In a good way! I went a little scant on the sugar, too. The recipe is best with fresh radishes, but it is very forgiving. 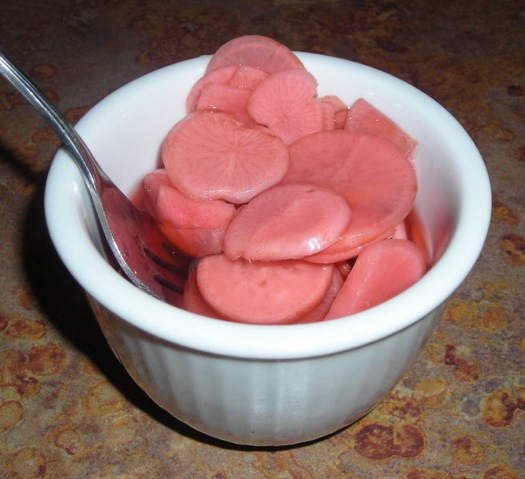 The brine wasn't quite enough to cover the radishes, at least in the jar I used, so I watered it down a little, but I wish I hadn't--the brine breaks down the radishes enough that they would've fit fine after a little while.

A warning: these smell TERRIBLE. They smell like septic. You will open the jar and think something died in there, or worse. But they don't taste like that! It's just something that happens with radishes when they break down a little. (My friend Michael, who runs the dazed and infused blog, has experienced the same thing when he's done radish infusions [like the daikon-infused vodka here].) So if you go to open your pickled radishes and you think you smell a dumpster, BRAVE ON, FRIENDS. Because the radishes themselves taste amazing, and so does the brine--I've been mixing it with nutritional yeast and vegenaise for a quick, tasty salad dressing.

The pickles are good as sides for any meal, or as toppings for salads, or on top of sandwiches, like below: 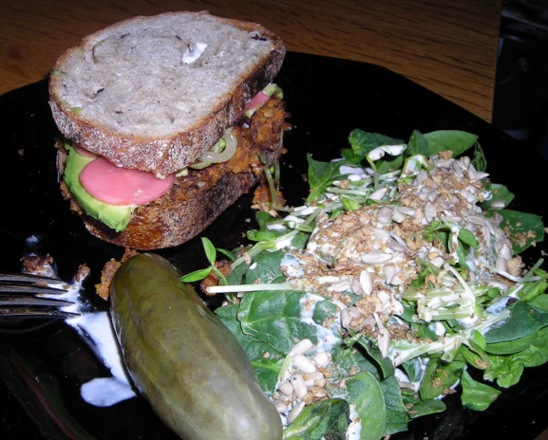 This is a sweet-potato-and-bulgur veggie burger recipe I adapted from a Mark Bittman recipe. Note the delicious and pretty pink pickles! Also the honking dill pickle on the side. I kind of love pickles.

The boyfriend's burger, with hot sauce.

So those are my two favorite radish recipes, but there are a couple others I plan to try, all from Martha Stewart (I am aware this should embarrass me, but I am not ashamed):
Sauteed Radishes.
Radish butter.
Glazed Radishes.
If you try any of them first, let me know how they are!
Posted by Sarah P at 10:53 PM